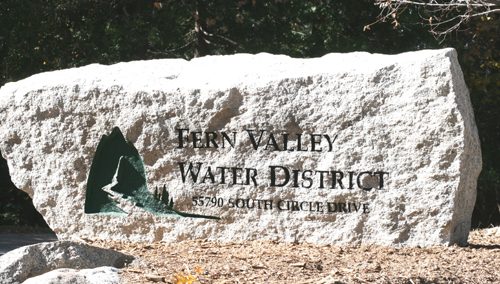 With minimal discussion, the Fern Valley Water District directors concurred with the Rate and Revenue Committee’s recommendation for new water rates last Friday. The board will vote on the proposal at its Oct. 20 regular meeting.

The committee, composed of directors Trisha Clark and Robert Krieger, has been developing the new rate recommendations for more than a year. A preliminary report was delivered to the board during the August meeting.

This proposal would set monthly meter charges from $30 for a ¾-inch or less meter to $2,400 monthly for an 8-inch meter. Currently, the largest meter in the district is a 6-inch meter and the monthly charge would be $960.

With the new rates, the committee estimated that water revenue would be about $800,000. The proposed new rates would be for five years with a potential maximum increase of 5 percent annually, according to General Manager Victor Jimenez. If an increase were needed, the board would have the discretion to raise rates between 1 and 5 percent.

Jimenez and the committee projected the revenues and costs, including capital investments, for the next 10 years, through 2026-27. This included paying off the unfunded other than retirement post-employment benefits in the next five years, he said.

The proposed rates were compared to current water costs. Meter charges can increase significantly. For a customer with a 5/8-inch meter, but no water usage, the water bill would increase from $32.70 bi-monthly to $60, nearly an 85-percent increase.

Several customers have come to the office upset about the possible increase, Jimenez said. After he explained the need and rationale for the new rates, they left with a better understanding and in a better mood.

The two tiers represent the district’s water sources — surface and ground wells. Water diverted from Strawberry and Tahquitz creeks, although it is treated, costs significantly less to produce than pumping water from the ground, Jimenez told the board. Thus, tier one, $4 per 100 cubic feet, represents surface water costs and tier two ($11.30) is the cost of providing groundwater.

“It’s expensive to pump out of the ground,” he said. “We have monthly utility bills whether we pump or don’t. And the volume of groundwater pumped increases the costs along with additional maintenance costs for the wells.”

Usage rates are for all customers. Jimenez emphasized that every customer will pay the same rate for water used. There is no difference between residential or single-meter and multiple-customer users.

And based on the 2015 San Juan Capistrano water rate case, Jimenez stated that a tier imposed just for conservation would not be legal, which is the reason for only two rate tiers.

“Looking at every year, it looks like a good blueprint,” commented President Jim Rees.

Because of the requirements for inside sprinkling systems for construction of new homes, Jimenez said that FVWD will discontinue selling 5/8-inch meters. In the future, the smallest residential meter will be a ¾-inch meter.

If the board approves the new rate recommendation at the Oct. 20 meeting, a public hearing will be held, probably in December. The proposal would be sent to customers and property owners within the district before the hearing.