Fire season 2017 had been very busy at Idyllwild Fire Department and it continued during Battalion Chief Mark LaMont’s discussion of the season. 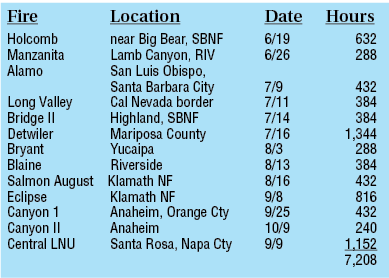 In the midst of his presentation of the fires, to which IFPD sent staff from June through early October, the department received another call to join a strike team being formed for the Freeway Fire in Rancho Cucamonga.

“We’ve been assigned to 13; today it’s 14 fires,” he told the commission. “Not bad for our size.” (See accompanying list of fires to which IFPD sent staff and the hours spent at the fire.)

The opportunity to work in this many fires offers invaluable, “priceless” training, LaMont told the commission. “What we learn will serve you.”

Although IFPD staff were gone for more than 7,000 hours, LaMont assured the commission that all of this time, as well as the necessary overtime at the Idyllwild Station while staff was gone, is reimbursed.

“That also includes the use of equipment, which the other fire departments essentially rent from us. IFPD is not paying for equipment or manpower on these events,” he stated.

Commissioner Jerry Buchanan, chair of the finance committee, reported the committee would meet on Nov. 8.

“The first quarter financials look good,” he told his colleagues.

Through Sept. 30, the end of the first quarter of fiscal year 2017-18, found expenses were nearly $180,000 greater than revenue. However, as with the other special districts, Riverside County does not distribute any property-tax revenue until December.

“Salaries are high because of the fire season,” Buchanan acknowledged, and also said, “We’ll catch up with the reimbursements.”

He also noted that emergency medical calls had dropped this year compared to 2016, but these are not seasonal and could increase as winter arrives.

In other business, the commission reviewed six board policies. Four were approved as is or as amended. Staff was asked to review and revise two policies. These include property claims against the district and employee records.

The commission also sent its Conflict of Ethics policy to the Board of Supervisors, which has not acknowledged a new policy since 1978.