Specific cash reserve funds, for purposes such as operations, capital improvements and equipment, is an aspect of the proposed rate increase for Fern Valley Water District.

Directors Trisha Clark and Robert Krieger, who composed the Rate and Revenue Committee, had recommended that the board set aside funds for specific purposes that might occur unexpectedly or in emergencies. Resolution 569 was adopted unanimously.

“We’re basically following through on our comments and make it clear to the public what some of the rate increase will be used for,” said Director Richard Schnetzer.

With the pubic hearing on the rate increase less than six weeks away, the board approved a resolution creating four reserve accounts with projected funding levels.

The largest reserve will be for Operations (or a general reserve). It will support working capital needs and cash flow. Its funding level goal is 85 percent of annual operating expenses, which would be about $700,000.

The capital-improvement reserve would provide funds to improve, repair, rehabilitate or replace capital assets. The funding goal is 3 percent of net capital assets.

A rate-stabilization reserve was created to lessen the year-to-year fluctuations in revenues or expenses. This reserve is not intended to artificially suppress rates. Rather “to enable smooth or level annual adjustments to rates despite uneven changes in underlying costs or variations in annual revenue,” according to the resolution. Its funding goal is 10 percent of fixed charges.

The fourth reserve is for equipment and fleet repair or replacement. Over the next 10 years, the district plans to set aside $35,000 annually until the reserve reaches $350,000, which is its funding goal.

FVWD currently has $1.5 million available for budgetary purposes. There are eight months remaining in the fiscal year and property tax revenues, about $300,000, will begin to be received in December.

During the director’s comments, President Jim Rees announced his disagreement with the proposed rate increases. He opined that the usage rate should have been increased more and less reliance placed on raising the basic rate.

“This hurts poor people and people who conserve water,” he said. “You did a lot of work and I understand it. But I probably will vote against it.”

In other business, the board received a letter from its counsel, Ward Simmons of Best Best and Krieger of Riverside, with advice on how to proceed in filling its fifth board seat, which has been vacant since February when former Director Charlie Wix resigned.

James Wise was a candidate in the August election, which was not necessary because there were only three candidates for three seats. The Riverside County Board of Supervisors appointed the three individuals, Wise and current incumbents Rees and Krieger.

Subsequently, Wise wrote the district stating he was declining to accept his appointment for a term starting in December. Since the term does not begin until next month, the district cannot officially accept the resignation until then.

At the meeting, the board agreed it would announce the vacancy and request applications by Dec. 15. These may be reviewed at the Dec. 29 meeting or possibly held until January. An appointment will be made before Jan. 30, 2018.

While Jimenez attributed some of the increasing use to the lifting of drought restrictions, Krieger noted that late summer and early fall were unusually warm, setting several high-temperature marks. This also would have spurred greater water use.

The current FVWD consumption for 2017 is the greatest since 2013, when customers used 33.2 million gallons through October.

Krieger also noted that the unaccounted-for water level was 15.4 percent, compared to 10 percent a year ago. 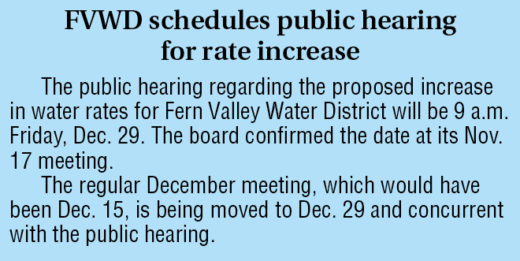