Representative Dr. Raul Ruiz, Democratic incumbent for California’s 36th Congressional seat, is having little trouble raising money for his third re-election campaign. At the end of 2017, he had far more cash available than the combined total of all his challengers.

The election is still 10 months away and Republicans still see the district as conservative territory. But since his 2012 upset of former Congresswoman Mary Bono, Ruiz has easily been re-elected. And money has been an important factor in Ruiz’s continuing success.

He has easily raised significantly more campaign funding than his opponents in 2014 and 2016.

At the end of December, Ruiz had more than $2 million in cash available. At this point two years ago, Ruiz had $1.5 million. By the time of the 2016 election, in which he beat State Sen. Jeff Stone, he had raised nearly $3 million.

For this campaign, individual contributions have totaled about $1 million and political committees have given him nearly $750,000.

Five Republicans are vying for the opportunity to face Ruiz in November. In California, the two candidates with the most votes in the June primary will be on the November ballot.

Pelzer is the leading Republican fundraiser. Through the end of December, she had nearly $150,000 in cash. Her contributions have been $179,000, of which about one-third were greater than $2,000. While the vast majority of her money is from California residents, Pelzer has received contributions from Massachusetts, Texas and South Dakota.

Further, two weeks ago, the Republican National Congressional Committee designated her a “Young Gun.” This is a reflection of her fundraising prowess through 2017. RNCC sets fundraising goals for candidates to meet.

In her endorsement Bono Mack said, “Common-sense leadership is noticeably absent in Washington, and we need a strong leader who can cut through the partisanship and bickering and get things done for California families. I have known Dan for many years. He is honest, hardworking and will be the leader our district so desperately needs in Washington.… Kimberlin, having just relocated to the district, certainly brings a new voice to the race. I applaud her for deciding to get involved, but knowing a congressional district is of highest importance and Dan has that knowledge and experience.”

And Bentley reported neither contributions received nor any expenditures on his campaign yet. 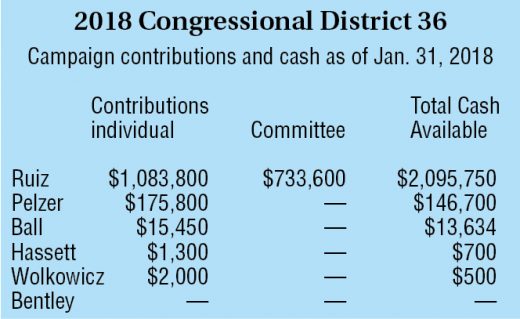