More to the mathematics of music than the beat

“Musical form is close to mathematics — not perhaps to mathematics itself, but certainly to something like mathematical thinking and relationship,” observed 20th century Russian composer Igor Stravinsky.

“Music is the pleasure the human soul experiences from counting without being aware that it is counting,” said German mathematician and

The relationship between music and math — art and science — may seem unlikely or simply a curiosity, but to many others, including Michael Staff, it is fundamental and an insight into both worlds.

From 7:30 to 9 p.m. Monday, Feb. 19, at Stephens Recital Hall on the Idyllwild Arts campus, Staff will discuss and demonstrate the “Intersection: The Math Behind the Music.”

Staff is only 34 years old, and math and music have been concepts and realities he has encountered, observed, grappled with and challenged while finding ways to cooperate with both since his youth.

He is a Palm Springs native who studied with Robert Hennekes in Palm Springs and then became a student to Dr. Tao Chang in Irvine.

Ten years ago, he and his wife moved to Idyllwild. Their history reflects another symmetrical event; they met at one of his performances.

Symmetry in music is like a snowflake with its geometric symmetry. Music displays various versions of mathematical symmetry and Staff will describe, discuss and demonstrate these relationships during his presentation. 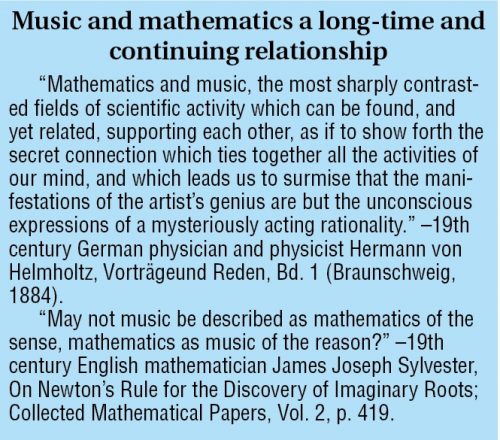 “Music is one of the few things that everybody has in common,” he stated. “Even if it’s not the same taste, everybody likes some kind of music.” But not everybody is aware of the relationship between mathematics and music.

“This relationship is mind blowing,” he said quietly and eloquently. “It’s a relationship we don’t think about, but it describes the tonal ambiguity in music.”

Staff admitted that his talk would cover abstract concepts. For example, the mathematical topic, on which he will focus, is Group Theory. A technical definition is “sets equipped with an operation (like multiplication, addition, or composition) that satisfies certain basic properties. As the building blocks of abstract algebra, groups are so general and fundamental that they arise in nearly every branch of mathematics and the sciences.”

Group Theory is more ubiquitous than most people know. Solutions to the popular Rubik’s Cube actually incorporate an aspect of it.

While he will explain these concepts, the talk is not a chalkboard of equations. Rather, it will be an auditory experience. Dmitri Shostakovich, a Russian composer and pianist, employed, perhaps unintentionally, symmetry in his work and attendees will hear some of this.

Symmetry aids us in identifying with the happiness of the piece, the easy listening, Staff said. Rachmaninoff, who escaped the Soviet Union, was known to have said he could detect the conditions of his fellow Russian composers, such as Shostakovich, who remained in the Soviet Union, through their music.

“His ‘Eight String Quartet’ is the best example,” Staff said.

Besides the exposure to past composers, Staff’s presentation offers a peek into the future. For Marvel fans, Group Theory and music are on the cusp of future cryptography methods, too

Before the session ends, Staff will play a piece from Johann Jakob Froberger, a 17th century German baroque composer, and contrast it with his own work, “Variations on Gounod’s ‘Funeral March of a Marionette.’” Of course, Gounod’s work is often recognized as Alfred Hitchcock’s theme song.