Californians already pay more on average for gasoline than motorists in other states. Now they’re watching as prices spiral upward to levels not seen in three years.

Figures released by the state Energy Commission show that the price paid by Southern Californians is dramatically higher than the national average of $2.65 for a gallon of regular gasoline.

In the Los Angeles-Long Beach area, the Auto Club of Southern California reports the average price for self-serve regular was $3.56 as of March 29. The statewide average was $3.49. “The upward price pressure is building,” analysts wrote.

The Idyllwild Town Crier reporter recorded local gas prices March 22 to 27. In Idyllwild, a gallon of regular sold for $3.70; in Pine Cove and Mountain Center, $3.30. Prices moved upward toward the Easter holiday at some local stations.

The price Californians pay at the pump includes the tax hikes imposed November 1, 2017, around the usual changeover to the cheaper winter gasoline blend.

SB 1 (Road Repair and Accountability Tax Act) raised the base-excise taxes on a gallon of gas from 18 to 30 cents. In July 2019, the price-based excise tax will increase from 9.8 to 17.3 cents a gallon.

By then, the state excise taxes on gasoline will total 47.3 cents. Adjustments for inflation begin in July 2020.

The increased tax revenue (including from the diesel fuel tax increase and from other provisions of SB1), will generate $52 billion over 10 years to pay for repair and maintenance of freeways and local roads, bridges, culverts and overpasses; congestion relief; and investments in transit and non-motorized transportation.

The Town Crier reporter interviewed 11 Hill residents and visitors to get their opinions of gas prices.

Newlywed Tomme Duron, who recently moved to the Hill from Hemet, said, “The gas prices are not too bad up here in town. They are the same as in Hemet and are pretty cheap for the surrounding area.

“If you go down to San Diego, which is where some of my family live, prices are almost $5.”

Fern Valley resident Bryan Asch said he “remembers the $4 and $5 prices. That was … too high. I think gas prices now are not at all too high … They’re not in line with the price of a barrel of oil, but they are in line with where they should be with where the world is.

“In fact, here on the Hill, it is natural for gasoline to be a little bit higher because it takes the trucks a little bit more to get up these curvy, winding roads.”

Pine Cove resident Art Tobias told the Town Crier he has no quarrel with tanker trucks maneuvering on dangerous mountain roads, “but I am not buying the more expensive gasoline. I am disgusted at the price increases. They appear to be due to ‘political maneuvering’ rather than market forces and I don’t like having to pay more than drivers in other states.”

Tobias was “happier paying $2.70 a gallon for regular within the last year at the local gas station and market. Now it costs 60 cents more. I don’t like throwing my money away.”

Many people wonder why gas prices in California are so much higher than average. 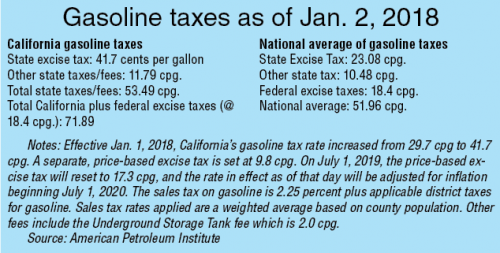 As of Jan. 2, 2018, California motorists pay a total of 71.89 cents per gallon in gas taxes, including 18.4 cents in the federal taxes, according to the American Petroleum Institute. The national average is 51.96 cents.

The Auto Club’s Weekend Gas Watch reports that “refinery maintenance and a downturn in gasoline production are pushing up Southland gas prices in a now-familiar pattern for early spring.

“March 28, the US Energy Information Administration reported a decline in West Coast gasoline inventories and production. That drove Los Angeles wholesale and rack gasoline prices to another 52-week high point. At the moment, upward pressure continues on pump prices …”

Spring said, “When facilities are taken offline for maintenance and repair — or are damaged unexpectedly — prices rise.

“The Torrance refinery fire in 2015 shut down the facility for many months and California’s gasoline was replaced from foreign sources.

“California uses a special blend of less-polluting gas during the summer months. It is more costly than blends used in other parts of the country. There are probably five or six refineries around the world that will produce the formulation of gasoline we need.

“They’ll ship it, but the price is higher and we pay more for it as consumers.”

“The burden of additional fuel costs … falls completely on motorists, including households and businesses … We estimate that motorists … will spend about $2 billion more on gasoline and diesel fuel as a result of the program.”

Marie Montgomery, the Auto Club’s Public Relations staff, said gas prices are high, too, “because California lacks a direct pipeline from the Midwest for oil.

“And even though California doesn’t produce as much oil as it used to, California refineries provide the vast majority of the gasoline used in Southern California.

“We’re a little bit more vulnerable than other states because of anything that disrupts or potentially could disrupt our supply.”

Commenting on gasoline as a commodity, Spring said, “Traders know our supply is volatile. The price goes up when investors in gasoline futures expect to make a quick buck off the increase in pricing.

“Most every spring, traders around the country know that demand will increase in the late spring for the summer … and typically prices go up.

“The downside for producers is they have to compete with investors for a gallon of gasoline ... people who have no intention of producing anything. They just want the futures. They’ll be selling it off at some point.

“That can drive the price up.”

What do you think about gasoline prices?

Editor’s note: Recently, with gasoline prices fluctuating on the Hill, the Town Crier decided to ask people in Idyllwild for their opinions.

“As an arch environmentalist, I think it is good the gas taxes and prices are high. That will encourage more car companies to develop hybrid-electric and electric cars to reduce emissions and fossil fuel consumption.”

“If I have to buy gas in Idyllwild, it causes me heartburn; but I avoid it at all costs.   The prices are over my budget right now.”

“Taxes are quite a chunk of the price. I would say to the legislators, ‘Let’s get a little involved in keeping this rollercoaster under control … when it is a product that is so widely used by the public.’ Sometimes they don’t do enough.”

“They’re too high in California. My husband and I did a road trip to Des Moines about five months ago and gas was a dollar cheaper than in California. It is crazy. I think gasoline companies know we’ll pay the price because we are such a car culture. And we have refineries here [in the southland.]  Why should it be more here than anywhere else?”

“It is ridiculous. The price varies so much from state-to-state, city-to-city. We’re getting ripped off. Gasoline companies are just gouging people left and right. I don’t think the price has anything to do with the supply and demand. It is truly calculated.”

“Regular gasoline is a $1.20 cheaper in Arizona. It is so high [here] because of California taxes. Other states can get gasoline cheaper. Why can’t we?”

“Gas prices are really ridiculous. Corrupt. It really bothers me when I go into a low socio-economic area and the gas prices are high. I know we have regulations in California, but you go to Arizona and it is ‘El Cheapo.’ I think we could do better.”