The chief organization in the U.S. noted for teaching leadership, building character, and 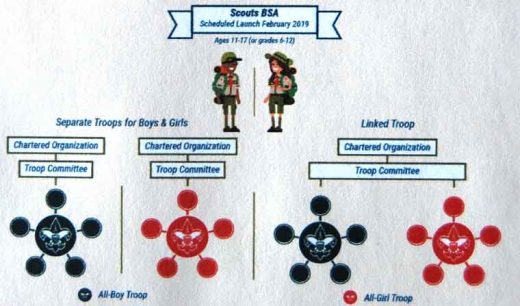 developing outdoor and other life skills in pre-teen and high school-aged boys announced May 2 it will open its doors to welcome girls.

The Boys Scouts of America is broadening its boys-only “iconic programs” to families and young people, but will retain its brand name.

BSA told the Town Crier in an email, “There are over 70 million children in America who could benefit from any character-building program, and today, organizations like ours and others only serve a fraction of them. “That is a huge unmet need, but one we can help address.”

California Inland Empire Boy Scout Council Assistant Scout Executive/Chief Operating Officer Ricci Dula said BSA “polled communities and they were interested in having better opportunities not just for boys, but for the girls to join. Therefore, nationally we decided to do so.”

Beginning in February 2019, the new Scouts BSA program will admit older girls, making them eligible to take the same curriculum as older boys and become Eagle Scouts, the highest rank in boy scouting.

“Scouts BSA is not a co-ed program,” Dula emphasized, “but a program that is now admitting girls and allowing them to earn the same ranks, and we are not diluting the advancement requirements.”

The new Scout Me In program is already available to Cub Scout-aged younger girls. More than 3,000 in kindergarten to fourth grade enrolled in the “Early Adopter Program” (between January and May 2018) and are participating in Cub Scouts, according to BSA’s website. Full launch of that program will take place June through August 2018.

Dula added, “The boys and girls will have their meetings separately, and not together. As an example, for the troop meetings, they may have the same opening of the flags, but will then meet separately.

“Cub Scout dens also will meet separately. Both programs can go to activities together.”

Amy Hawley, Idyllwild Daisy and Brownie Girl Scout Troop 533 leader, said, “If my daughter [a Brownie] wanted to be a Cub Scout, I would support it, but I would also encourage her to also be a Girl Scout.

“Kids play soccer and guitar lessons. I don’t think one would necessarily take away from the other.

“With our age group, it is a moot point — there isn’t a Cub Scout troop available for them if they wanted to join. But if there were, that would definitely be a conversation to bring up with the parents.”

Dula’s council serves Riverside and San Bernardino counties and about 15,000 youth and 8,000 adults. “We are open to all age-level Scouts on the Hill,” he said.

“We’ve tried Cub Scouts in the past with not a whole lot of success, but with the inclusion of girls, that could change.

“And there absolutely has been a lot of interest from families with girls who want to be a part of both programs. Our current base seems to be fine with the new programs and we’re moving forward.”

Last October, BSA announced the pending changes to include girls in its newly restructured programs, but several Boy Scouts programs have been co-ed for decades.

The Town Crier reached out to community members to get their thoughts on the BSA’s new initiatives.

Girl Scouts of San Gorgonio Council member Shannon Ng and the mother of an Eagle Scout described herself as “very pro-Girl Scouts. It’s something I’m passionate about.

“The issue now is that Boy Scouts is encouraging girls to participate in programs designed with boys in mind. The Girl Scouts program is specifically researched and created to meet the needs of girls.

“The stigma, ‘Girls can’t do math or science,’ is still prevalent in the news, advertising and in Boy Scouts. In Girl Scouts, we help the girls discover that it’s simply not true. We highlight the women who lead and change the world in all fields, not just cooking and crafts.”

Council President and CEO Cynthia Breunig said, “Both changes [Scout BSA and Scout Me In] are potentially damaging to Girl Scouts.

“They will cause further brand confusion and give the false impression that we are one organization. More than 53 percent of non-scouting families believe the two organizations are the same.

“The Boy Scouts want to reverse their declining membership by adding girls, so there is no reason for the Boy Scouts to reduce this confusion; in fact, they benefit from it.

“We have a history of inclusion and girl safety, commitment to reaching girls in under-resourced communities, and experience with building confidence and leadership identity in girls.

“Both the Girl Scouts and Boy Scouts strive to build character and leadership in their members, but go about it in different ways.

“Our activities and programs are based on research specifically about girls and are backed by 106 years of experience.”

In a March 2018 interview with the Town Crier, Chuck MacKinnon, the development chief for the GSSGC, which covers Idyllwild Troop 533, as well as 12,386 girl members and 5,657 adult members in Riverside and San Bernardino counties, commented on the challenges and influences facing girls:

“The issue is huge and complex. If girls start young in Girl Scouts, they have a much greater sense of self when they get to that time when every child is going to question and be questioned.

“Grades K-5 is an ideal age to capture a girl’s attention. Equipping a girl early for those challenges is a real good thing. If they come into Girl Scouts at an early age, then barriers don’t need to be overcome.

“They already have their sense of self in nature and in being willing to take risks and to take independent action … even when they are quite young.”

In mid-May, Breunig’s council helped kick off a nationwide campaign and “call-to-action” to “protect, preserve, grow, and defend Girl Scouts.” The national organization aired a “powerful Girl Scout public service video” on May 14 and staged a social media campaign May 15 asking Girl Scouts across the nation to “show … Girl Scout Pride by sharing … love of Girl Scouts on social media, and wearing pins and clothing that identify [them] as Girl Scout supporters.”