Fundraiser for lost and abandoned cats and dogs

The fourth-annual Paws for Rhythm and Brews will be Saturday, June 2, at the Idyllwild Nature Center.

There will be plenty of beer, 16 different brewers, a winery, a bigger and better Kids Zone, and an intriguing silent auction. All of the proceeds help “keep the doors open,” said Janice Murasko, director of Animal Rescue Friends of Idyllwild.

Several of this year’s brewers were recently announced as gold, silver or bronze winners in the 2018 San Diego International Beer Competition.

Among the returning and popular breweries are Garage Brewing of Temecula, La Quinta Brewing, Ritual Brewing of Redlands, Claremont Craft Ales and Oceanside’s Belching Beaver Brewery. Four breweries will be making their first appearance at Paws for Rhythm and Brews this year — Alosta of Covina, Euryale of Riverside, R T Rogers of Sierra Madre and Transplants of Palmdale.

Sixteen is the maximum number of breweries the festival can accommodate. By December, Murasko and spouse Robert Hewitt start confirming the breweries’ intents to return. “Some years, I get calls from breweries wanting to participate,” she said.

The idea for the event originated during one Idyllwild’s biggest events, the Art Alliance’s annual October Art Walk and Wine Tasting. This was a few years before the first ARF Paws for Rhythm and Brews. She overheard several walkers ask, “Where’s the beer?” After contemplating this question, she and Hewitt decided to have a “beer” festival as an ARF fundraiser.

And, of course, there is always a winery present for those who might ask, “Where’s the wine?”

It’s been successful, she said, “based on ticket sales, some people are coming from as far away as Anaheim Hills.”

The music will be familiar to regular patrons. Super 300 Swing Loaded Blues Band is returning for the fourth year.

The Kids’ Zone is expanding this year with more activities, Murasko promised. And the Art Alliance of Idyllwild will offer assistance entertaining the kids while adults sample some of the libations.

The silent auction will feature a pair of Southwest Airlines tickets, round trip, to wherever it flies; and tickets to family activities such as the San Diego Zoo, Davy’s Locker for whale watching, Sky Zone, an indoor trampoline park, Aquarium of the Pacific and more.

The stein-holding event will be held again. And the home-brewing competition has become very competitive this year with noticeably more entrants, according to Murasko. Entries close May 25 and the winners will be announced June 2.

The Coachella Valley Homebrew Club will be present and offer demonstrations for prospective home brewers. Living Free may bring some canines, who will be available for adoption, Murasko said.

Regular tickets are $31 online (www.arfbeerfest.com/apps/webstore/) and $35 at the gate on June 2. There are also tickets for those older than 12, who are non-drinkers, for $5. Tickets may also be bought locally at Mountain Paws, Middle Ridge Winery Tasting Gallery, Idyllwild Bake Shop and Brew, and the ARF House.

And as of Sunday, May 20, several VIP tickets are still available, for details please visit the website. 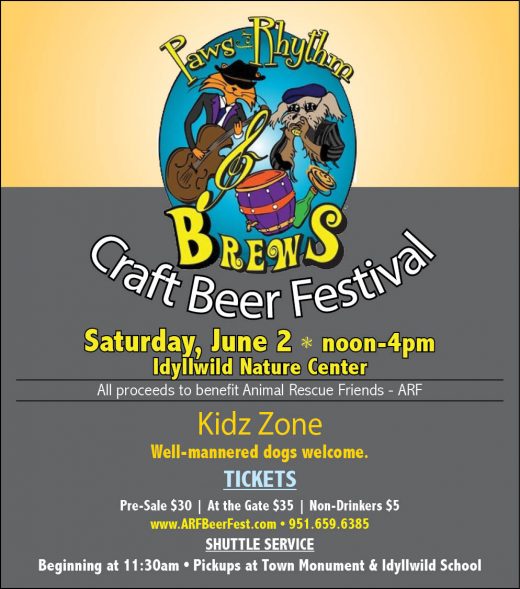