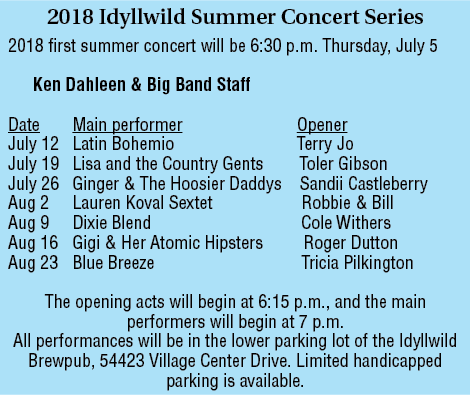 In two weeks, the Idyllwild Summer Concert Series will return and again entertain, please and excite Hill residents and visitors for another year.

The first 2018 concert will be at 6:30 p.m. Thursday, July 5. ISCS Producer Ken Dahleen leads his Big Band Staff in a rousing celebration of July 4th, big band music and the return of summer music in the outdoors.

The major change this year is the concerts’ location. Performances will be at the end of the Idyllwild Brewpub parking lot below, adjacent to the Idyllwild Community Center property.

The concerts were moved this summer as work continues on the grading and parking for the future ICC.

After 18 years, Dahleen has not let this change interrupt the series. The concert location has moved several times since it began in 2000. In its 19th year, eight concerts will be held.The final one will be the ever-popular Blue Breeze on Aug. 23.

Except for the Big Band Staff, all concerts will have an opening performer at 6:15 p.m., and the main act will begin at 7 p.m. consecutive Thursdays.

“Next year will be the 20th,” Dahleen said proudly. For several years prior to that first note played in 2000, Dahleen and his fellow band members had often wished to offer their music locally. “We kept saying we should do in it in Idyllwild,” Dahleen said. Then the warm long days of summer came, “and it was too late,” he added.

Finally in the late spring of 2000, he decided that another year would not pass without some local performances. After talking with several people, he found significant support within the community; many offered to help defray the costs.

Next, Dahleen became the producer and organizer of the series. Since then, it has grown from four concerts, essentially organized in three weeks, to an eight-concert series that requires months of preparation and attention.

Idyllwild is a great summer destination, Dahleen stressed. This helps him recruit performers. “Every place else is hot. And I have a personal relationship with just about everyone of them,” he added.

When asked if he has a preference for producing or performing, Dahleen responded, “I like variety. I enjoy everything. ‘Variety is the spice of life’ and that applies to the work place, too,” he said.

As the 2018 ISCS begins, Dahleen expressed his gratitude to the many local residents who have helped, and especially to Loie and David Butterfield, as well as [3rd District] Supervisor Chuck Washington and his staff.

But he wanted to remind the audience that the concerts are free, “but not without cost.”