Unlike the gubernatorial race or several Southern California congressional contests or the local state Senate District 28 race, Democrats have not poured money into Elia’s challenge; only $1,000 from the state party.

Through Sept. 22, he has received about $50,000 in contributions, which is about two-thirds of Voepel’s contributions. Since then Elia has received $6,000, of which $5,000 came from the Political Action for Classified School Employees. Voepel has collected $4,300 from three political action committees; the largest $2,000 from the New Car Dealers Association of San Diego.

In total, Voepel has received more than 100 contributions of which 18 were for more than $2,000 and another 24 for $2,000. His largest individual contributions were for $4,400, of which Philip Morris gave two, one in March and the second in June. The Barona Band of Mission Indians have given Voepel three contributions for a total of $8,700. The other large donors have been Chevron contributing $8,800 and AT&T, which has given the incumbent $8,000.

Through Sept. 22, Elia has received 60 contributions. The single largest individual gift was $4,500 from himself. The Sycuan Band of Mission Indians gave $4,400 during primary season.

Almost all of Elia’s contributions have come from individuals. However, Alan Goetz of Spring Valley has given Elia a total of $6,100, half in the past month. The International Brotherhood of Electrical Workers has given $3,500. Elia has received five other contributions of $1,000 or more. 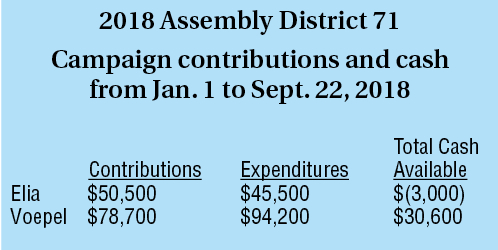