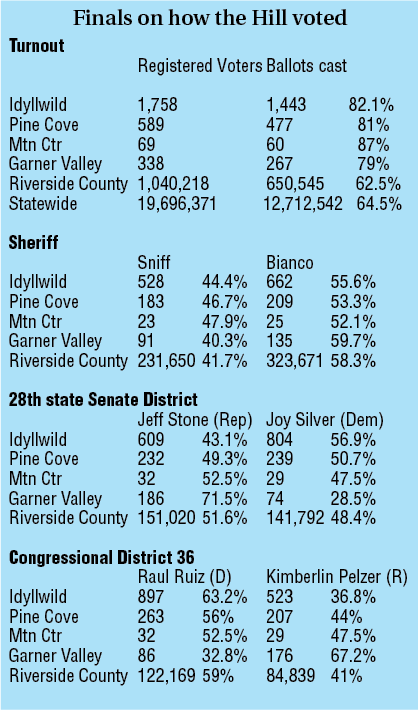 Regardless of how Hill residents voted, which candidates they favored, the Hill is fertile area for candidates to reap votes. Again, from north on Highway 243 to Paradise Corners, the turnout substantially exceeded state and county interest in the November election.

The California Secretary of State reported that 12.7 million Californians cast ballots in last month’s election. The statewide turnout was 64.5 percent of registered voters.

In Riverside County, the turnout was almost the same — 62.5 percent.

Yet, as good as these results seem to be, turnout on the Hill was 80 percent or more. Only Garner Valley failed to reach that threshold, but its 267 ballots were 79 percent of registered voters.

In Mountain Center, turnout was 87 percent, followed by 82 percent in Idyllwild and 81 percent of Pine Cove registered voters.

While voter interest was high throughout the Hill, the support for various candidates varied from precinct to precinct except for the race for Riverside County sheriff.

Hill voters favored challenger Chad Bianco just about as much as the whole county. The final tally saw Bianco garnering 58 percent of votes cast for sheriff and he received more than 52 percent of votes in each of the four Hill areas.

Bianco got nearly 60 percent of the Garner Valley votes. While he also got a majority (52 percent) in Mountain Center, the actual vote was close at 25 to 23 votes for incumbent Stan Sniff.

In the race for the 28th state Senate seat and the 36th Congressional District seat, the partisan difference of the Hill neighborhoods was quite apparent.

Stone, in his second Senate race and as a former 3rd District supervisor, received 51.6 percent of votes cast in this race. Silver, who moved to Palm Springs several years ago and has not previously run for public office, came close to an upset with 48.4 percent of votes.

Hill voters were not unified in the support of the two candidates. Idyllwild and Pine Cove favored Silver. Fifty-six percent of Idyllwild voters cast ballots for Silver, who came to several Idyllwild Indivisibles meetings.

Pine Cove voters were much less sure of their favorite candidate. Silver got 239 votes from Pine Cove, which was only 50.7 percent of the ballots cast for this race. Stone received 232 votes.

Four years ago, in his first campaign for Senate, Stone collected 53 percent of the vote to defeat fellow Republican Bonnie Garcia of Palm Desert. In that race, Idyllwild and Pine Cove cast more than 60 percent of their votes for the former supervisor.

Idyllwild voters strongly supported Ruiz, casting 63 of their ballots for him over Pelzer.

In the Hemet Unified School District race, former board president Ross Valenzuela was reelected to another four-year term. Incumbent Bob Davis, who was appointed in September 2017 when former director Joe Wojcik resigned, was the leading vote getter for the second seat and a full four-year term.

While most precincts, including Idyllwild, Pine Cove and Mountain Center, cast ballots similar to the whole school district, Garner Valley exhibited an independent streak. While Davis also was their top choice, Jamie Swain, a woman supporting more vocational courses, got 77 votes as the second choice, and Valenzuela was their third choice with 49 votes from Garner Valley.

Measure X, the proposal to allow HUSD to borrow $150 million over the next few years for school repair and security measures, passed easily. Needing a minimum of 55 percent of the votes cast, the final support was 63.85 percent casting “yes” ballots.

However, a majority (52.5 percent) of Garner Valley voters opposed the bond measure in contrast to a majority of the voters in the other Hill precincts.