Editor’s Note: Marshall Smith is a cast member of “Our Town” playing the paper’s editor, Charles Webb. He writes, in the first person, of his experience both with Wilder’s text and as a cast member of the local production.

Isis Theatre is presenting Thornton Wilder’s “Our Town” starting Friday July 8 through Sunday July 10 at the Caine Learning Center. It is a full production that director Emily Heebner has crafted to enhance the spare staging and terse text that are hallmarks of “Our Town.”

When first produced in 1938, “Our Town” was a breathtaking departure from previous theatrical conventions. Broadway director Jed Harris staged this simple and stirring story of life in a small New Hampshire town on a bare stage with no scenery and minimal props. Reviews were mixed largely because of its break from previous staging conventions and what some critics saw as a too simple story with limited appeal. 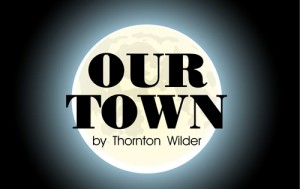 The 1938 Playbill described the three acts as “Life,” “Love,” and “Death,” and the use of pantomime and a Greek chorus commentator in the person of a Stage Manager, bothered some critics. But the New York Times’ Brooks Atkinson seemed to get what the audiences were getting — that there was something uplifting and deeply touching in the simplicity of the staging, story and universality of the themes of family, class separation, small town gossip, hushed-up issues, and practiced piousness. There is also a then-radical undertone that questions young boys dying in foreign wars, the readiness of young people for marriage and the concept that the husband is the boss in a family. Wilder subtly promotes equality for women and empathy within and outside of the familial structure. Atkinson wrote,”[Wilder] has given it [the play] a profound, strange, unworldly significance brimming over with compassion. ‘Our Town’ has escaped from the formal barrier of the modern theater into the quintessence of acting, thought, and speculation — a hauntingly beautiful play.”

Why has “Our Town” become one of the most produced of American plays? It is the quintessential opposite of scenery-heavy opulent productions like “Phantom of the Opera.” There are no onstage lakes or chandeliers to elicit audience “oohs” and “ahs”. For more than 70 years, American and international audiences have been drawn to the tender tugs to the heart brought about by the simple pleasures of birth, daily life, and death in Grovers Corners, New Hampshire — the shucking of beans, the family ritual of breakfast, a father’s gentle criticism of his son’s behavior, an argument between a mother and a daughter and a realization that certain opportunities may present themselves only once.

In the production, when I am asked, as the town’s newspaper editor, to comment on Grovers Corners, I say that it is pretty ordinary town, without much culture. Then I add, “But maybe this is the place to tell you that we have a lot of pleasures of a kind here.” I describe the sun coming over the mountain in the morning, the birds, and the change of seasons as things we all appreciate and look forward to — the simple pleasures of our town. I also note that 90 percent of students graduating from local high school settle down in Grovers Corners even after going away to college. In another scene, the boy that will wed my daughter Emily chooses to marry early rather than leave her to go away to agricultural school. And in another instance, a mother gives her son, my son-in-law, her “inheritance” to purchase equipment for his farm rather than to pay for a dream trip to Paris for her and her husband.

“Our Town” reminds me of this town — about the same size, with most of us choosing to stay here because of the simple pleasures living here provides — the sun coming up over the mountain in the morning, the birds, hiking, critter-watches, alpen glow in the evenings. Just as in “Our Town,” it is for a sense of community, of friends, of small town pleasures like our Fourth of July Parade, our festivals, the dump (best view on the Hill), and especially our coming together when others are in need that keeps many of us in our town. And what there seems to be in Grovers Corners, there seems to be in Idyllwild — a pleasure in community, conversation and continuity. Tickets for “Our Town” are $18 for adults and $15 for seniors and students and are available at the door or online at www.isistheatrecompany.com. For more information, call (951) 692-9553.