The API is an index that combines the results of language and math achievement tests for the individual grades into one value for the whole school or district.

Two weeks ago the Standard Testing and Reporting results were released for tests taken in the spring of 2011. Idyllwild saw exceptional improvement in its scores, consequently the large gain in API was not totally unexpected.

“The next step at Idyllwild School will be incorporating new technology, which will help to achieve the next level of proficiency,” said Principal Matt Kraemer.

Cottonwood Elementary School still had the highest API in the school district. 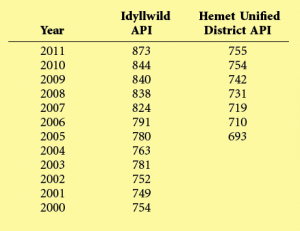 The state goal is for every school and district to achieve an API of 800. HUSD has six elementary schools with API scores greater than 800 and one middle school.

Kraemer is pleased with the Idyllwild results and admits that the school’s performance allows students time for subjects such as art, music and theater, which are much more limited in schools that are still striving to achieve an 800 score.

HUSD’s Western Center Academy, which only opened in 2010, had the highest district API of 922 and the highest middle school score in Riverside County, according to Principal Paul Bailey. The Academy is a charter school located at the Western Science Center, formerly the Western Center for Archaeology and Paleontology, near Diamond Valley Lake.

Throughout the state, 55 percent of elementary schools, 43 percent of middle schools and 28 percent of high schools met or surpassed the state API target, with the proportion of schools making the target rise 3 percentage points from last year, from 46 percent to 49 percent.

In 2001-02, the number of schools statewide at or above an 800 API was 23 percent of elementary schools, 16 percent of middle schools and 6 percent of high schools, for a total of 20 percent of all schools.

Idyllwild School first exceeded the state API goal in 2007, when students took the local index from 791 to 824. This is the fifth consecutive year where its API has exceeded 800.