The Bulldogs triumph advances them to the quarter finals against La Canada, 3 p..m., Friday, Feb. 24 at Hemet Stadium.

Hemet took a 1-0 lead after 27 minutes of scoreless play, when Jessica Self placed a shot across the Garden Grove goalie into the right goal corner.

But with two minutes left in the half, Garden Grove got an unexpected score.

The first half ended 1-1. While Hemet had many goal opportunities, their play seemed lackluster.

Coach Craig Dwinnell attributed it to the two lay off between the end of the regular season and Hemet’s first playoff game. The playoffs actually started Friday, Feb. 17, but as the number one seed in Division 6, Hemet had a first round bye.

Although he said his half time exhortation simply imploring the team to play with confidence, Dwinnell’s halftime ministrations clearly had an affect on the players. Hemet scored five more goals and shutout Garden Grove in the final 40 minutes.

The first goal came after seven minutes of play and the next two came within the next 10 minutes. Wednesday’s game might have been an occurrence of déja vu for Garden Grove, which lost to Hemet 4-1 in the second round of the 2011 tournament. 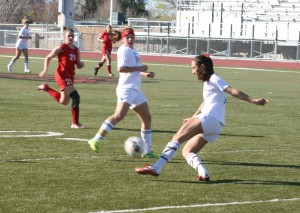 The quarterfinal opponent, La Canada, the only unranked Division 6 team to advance, defeated Ocean View 7-2 yesterday. Ocean View was ranked number seven in the final Division 6 end of season poll. The top six, including Hemet who is number one, all advanced as did Loara, the number 10 team. La Canada was the number 3 team in the Rio Hondo conference this year.