The race for Judge of the Superior Court Office Number 9 pits incumbent Judge Craig G. Riemer against Supervising Deputy District Attorney John A. Henry. This is the first opportunity in years for Riverside County voters to choose between two candidates for the same judgeship. While there are 12 judgeships up for election, eight are unopposed. This and three others have a race between two candidates for the first time since 1994.

Riemer urged voters to make their choice in the same way he evaluates other legal practitioners — by choosing someone who has demonstrated a commitment to the legal process, who has dedicated their time outside the courtroom to making that system the best, and by looking at the breath and depth of experience that individual has acquired in his years of practice.

In his candidate’s statement in voters’ sample ballot information packet, Riemer notes he has been a Superior Court judge for nearly nine years. “I have upheld the law and protected the rights of crimes victims and held both lawyers and criminals accountable,” he said. He notes he has presided over 168 criminal trials including murder, rape, child molestation and assault with a deadly weapon. “I have sentenced criminals to death, life without possibility of parole and life behind bars under the Three Strikes Law.”

Riemer said that candidates are often evaluated by their endorsements and that they matter but in a Superior Court race it is experience that voters should carefully evaluate. “Is the challenger more qualified than the sitting incumbent to process constantly expanding case loads?” is the question he suggested voters ask when evaluating the candidates. “Because of budget cutbacks, we don’t have abundant resources. We’re [sitting judges] all doing the work of 1 and a half to two people and you want someone who is experienced enough that they are up to that level. This requires doing it right and doing it well.”

Henry faults Riemer on several counts: that he has interfered with the timely issuance of search warrants, turning away warrant requests that are grammatically incorrect. “Where is the example of any search warrant I’ve rejected,” said Riemer. “Let me get this right — a law enforcement official wakes me up in the middle of the night to approve a warrant and I’m going to send it back again for faulty grammar so that he can wake me up again? That is just silly. Cops are not English majors and no one expects that of them.

“This race is not about Mr. Henry’s run for office, it’s about the union’s political clout and aspiration, an effort to impress on the board of supervisors their political strength. There were three vacancies in 2011, any one of which Mr. Henry could have chosen. Why challenge a sitting judge, in a more difficult race and costly race?”

Henry also faults Riemer for what he said is a lapse in judicial ethics — asking for campaign donations from Norco city officials when cases involving the city had been before him. Riemer replied that the cases were procedural, involving no substantive legal issues and that they involved the city, not the city officials. He noted that he also disclosed these cases, the appropriate action. Riemer also stated that the District Attorney’s office subsequently did not appeal or challenge any of his procedural rulings and that respected legal arbiters of judicial ethics found no fault in his actions given the facts.

When Stone was asked why he supports Henry, he replied that, as a conservative he (Stone) supports the death penalty and three strikes law, which Henry supports, and he questions Riemer’s positions on these issues. “Judges should not legislate from the bench,” said Stone. “The DA’s office has lodged overwhelming complaints that Riemer does not follow precedent.”

In his resume Henry stresses that he has trained prosecutors, police officers and medical personnel on issues relating to domestic violence and sexual assaults. He said he also acts to mentor other sexual assault prosecutors statewide through the California District Attorneys Association. In the interview, Henry said he is making this race because he believes in the rule of law and its just prosecution. “Justice is only achieved when those in power are committed to understanding and following the law,” he said. 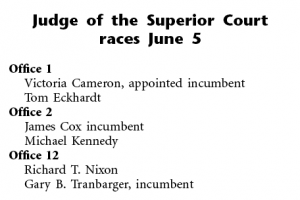 Henry has challenged Riemer to public debate, a challenge Riemer has as yet not accepted. “I am looking for the opportunity to speak to him and compare our positions on the issues,” said Henry.

Riemer notes that he is not a Supreme Court justice, that his job is not to interpret the law but to apply existing law to the facts of a particular case. He notes he has ruled for three strikes and for the death penalty based on the merits of the cases in front of him and that his personal positions on these issues are not at issue, given the responsibilities of his job as Superior Court judge is to apply existing law to the particular faces of the case.