Castleberry Country Club was once more the scene of local entertainment on Sunday afternoon, July 8. Sandii Castleberry hosted another of her popular wiffle ball golf tournaments, this time for the benefit of the Idyllwild Summer Concert Series.

As usual, groundskeeper Henry Negrete had done a marvelous job of grooming the 18 “grays” (or greens) on the 1.3-acre course. Pete Holzman served as the official starter, collecting $10 per entry.

The 19th Hole attracted a fun-loving crowd of participants and galleryites, and featured crackers, pretzels, dips, chicken empanadas, beer, wine and soft drinks, all for donations to the benefit kitty. 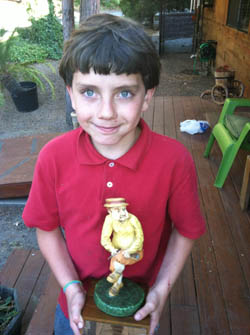 The event raised about $375, approximately $50 of which was collected by Jason Negrete, who traveled the course with his Radio Flyer refreshment caddy cart. It did not go unnoticed that Jason contributed his tips to the general kitty as well.

Some local guy won the event with an eleven-under-par score of 60. But other competitors observed that his victory resulted solely because of a double-eagle hole-in-one on the par-4 6th hole, achieved by means of a purely fortuitous bounce off a dirt clod.

There will be more Castleberry Country Club benefit tournaments, so contact Sandii and keep your eyes peeled for notice of the next one.