That was when the ballot box was nearly full. Several voters were concerned about trying to put their ballots in the box without damaging them, including Grant, who said, “I barely got my ballot in the box. They were picking the box up and shaking it, but it was still incredibly full.”

By 6:30 p.m. voters arriving to cast their ballots had to vote electronically. 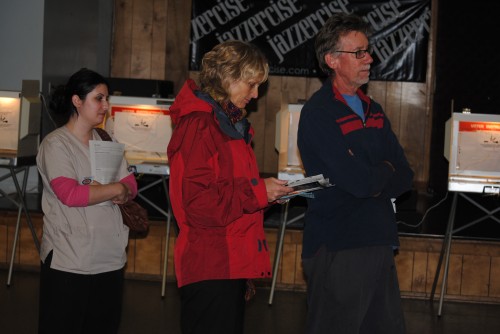 The turnout at Town hall was phenomenal, according to Johnson. By 7 p.m., she thought more than 600 voters had cast ballots at the polling site. In addition, nearly 200 voters, who received mail-in ballots had returned them to the local precinct.

The Pine Cove polling site had been popular, but the local inspector said there is a high proportion of voters who cast mail ballots. As of 7:15 p.m., the Pine Cove ballot boxes had not reached capacity.

About 180 Pine Cove residents did vote at the local precinct and about 18 provisional ballots were used.

Election night and next morning results

Actual votes in the Primary elections as of Wednesday morning, June 4