Kevin was born July 12, 1960, in Berkeley, Calif., the first son of Paul and Joanne (Frye) Nay. The family moved to Porterville, Calif., when Kevin was 12, where he graduated from Porterville High School in the class of 1978. Kevin excelled in his classes, ran on the cross-country team, and was sports editor of the school paper. After graduating early, Kevin spent a year in Kenya as an exchange student with American Field Service, where he learned Swahili and an appreciation for international travel for students and adults. (He put his Swahili to good use when he volunteered to help with the L.A. Olympics in 1984 and was assigned to assist the Kenyan team.) 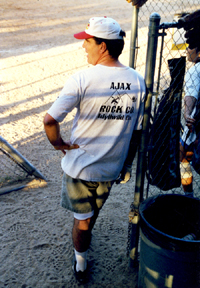 After returning from Africa, Kevin explored several options for higher education at Humboldt State College, Harvey Mudd College, Cal Poly Pomona, and U.C. Riverside. He moved to Palm Springs and found that he enjoyed desert life in this small city. After starting a small business with a partner selling hand-decorated clothing, he went into employee benefits consulting, founding Advantage Benefits to offer insurance and retirement services to small businesses and individuals.

Kevin met and married Leslie Hurst and their son Ian was born in 1993. He joined the Rotary Club of Palm Springs, and his volunteer activities included placing exchange students with families in the area and acting as a translator on Rotary trips to Mexico. He also volunteered as a youth sports coach and referee for soccer, basketball, and baseball, both in Palm Springs and Idyllwild. During summers he enjoyed playing on the Ajax Rock Company softball team in Idyllwild.

Kevin’s warm, gregarious personality and sense of humor and style will be lovingly remembered by his friends and surviving family, including his parents, Paul and Joanne Nay of Santa Barbara, his former wife, Leslie Hurst of Idyllwild, his son Ian (now attending Cal Poly San Luis Obispo), his brother Steve of East Wenatchee, Wash., and his brother John of San Francisco.

A Celebration of Kevin’s Life, with a buffet lunch, will be held in the Grill Room at the Spa Resort Hotel in Palm Springs from 11:30 a.m. to 2 p.m. March 30. Anyone who cannot attend but has a memory or story of Kevin to share is invited to email it to [email protected]

In lieu of flowers, please help fund the college scholarship that has been started in Kevin’s name with donations to the Rotary Club of Palm Springs, attention Denise Ellis, P.O. Box 171, Palm Springs, CA, 92263, noting that it is for Kevin’s scholarship.