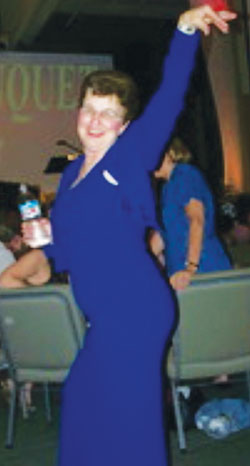 She loved to travel, all chocolates, singing and directing music.

From her earliest memories, Bonnie had an interest in a variety of activities, but most notably in music. She began piano lessons at age 5, and by her own good fortune, lived in a community that supported the arts. School and church choirs were plentiful, and she actively participated in her age-appropriate groups.

As she began to think about career options in high school, she explored many possibilities, but kept coming back to music. The turning point was during her senior year when she participated in the Illinois All-State Honor Choir, directed by Weston Noble--, one of the “greats” in the choral music profession. From that time on, she knew she wanted to be a choral music conductor.

She received a full scholarship to study at the University of Illinois, and sang in the U of I Concert Choir, directed by Harold Decker, American Choral Directors Association president. It was under Decker’s direction that she performed nationally and internationally, including tours in France, Austria and what was then Czechoslovakia. She also learned how to strive for and achieve choral excellence, and interacted with many well-known and respected directors, including Howard Swan, Maurice Beachy, Paul Brandvik, Kenneth Jennings, Jerold Ottley and many others. These mentors showed her the value of arts education, which goes far beyond singing the notes written on five lines and four spaces.

She taught music for 40 years, touching many lives at schools and churches, including an elementary school in her home town of Rantoul, Illinois; Valle Vista and Whittier elementary schools in Hemet; Dartmouth Middle School in Hemet; Hemet High School; Mt. San Jacinto Community College; and the First Presbyterian Church in Hemet.

Bonnie is survived by Doug, her husband of 45-plus years; her daughter Lara (Pumphrey) Dueppen of Woodland Hills; and her sister Janet Halsey of Atlanta, Illinois. She was preceded in death by her mother and father.

Cremation has been entrusted to Miller-Jones Mortuary and Crematory in Hemet. A memorial service will be held at Hemet High School Saturday, Aug. 20.

In lieu of flowers, donations will be accepted to establish a Choral Music Scholarship in her honor at Hemet High School. Please make donations payable to the PEO Chapter VC for the Bonnie Pumphrey Memorial Scholarship and mail to Miller-Jones Mortuary at P.O. Box 1077, Hemet, CA 92546.