The Mountain Fire is the second largest fire in California this year, only the Powerhouse Fire in the Angeles National Forest measuring 30,200 acres was bigger, by about 10 percent. The third largest was the Chariot Fire in the Cleveland National Forest at 7,000 acres.

Monday, July 15, began sunny and hot with clear skies. By early afternoon, the Mountain Fire, which began on private property on the west side of Highway 243, quickly jumped to the east side of the highway.

The rest of the week brought hot, smoky skies and fear as the fire meandered its way through Apple Canyon and into Garner Valley and eventually into the San Jacinto Wilderness, approaching San Jacinto Peak.

Before nearly 3,500 firefighters subdued the fire, it has burned more than 27,000 acres, including portions of the Pacific Crest Trail, razed homes in the Bonita Vista and Pine Springs Ranch neighborhoods, caused Idyllwild and Fern Valley residents to evacuate and nearly emptied Pine Cove, too.

While rainfall Sunday morning and afternoon helped with containment, firefighters had muscled the blaze away from Idyllwild and were already making significant efforts before the precipitation fell.

“The morning rain brought about an inch to 1-1⁄2 inches to the east side of San Jacinto Peak,” reported Incident Commander Jeanne Pincha-Tulley. “This storm [in mid-afternoon] is more widespread; rain is falling all over the fire area.”

Pincha-Tulley described the rain as “… our version of aerial delivery of water.”

“The weather allowed us to attack the fire,” said Riverside County Fire Chief John Hawkins. “It knocked down the flames. The benefit of the rain not only helped put the fire out but allowed us to end the evacuation.”

Flames and smoke could be seen just below the agency’s helicopter site and along the road at the front of the station.

By late Monday afternoon, the fire was entrenched in Apple Canyon. Residents there were evacuated. The fire eventually burned through Apple Canyon and destroyed three homes and three mobile homes in the Bonita Vista neighborhood and a commercial building, a workshop, a garage and a cabin at Pine Springs Ranch.

By evening, a decision was made to request a Type 1 Incident Management Team. Team members began arriving Tuesday evening.

By noon Tuesday, the fire had consumed nearly 8,000 acres and more than 700 firefighters were already on site.

Other than the Apple Canyon area, no other evacuations had been ordered, but that would quickly change Wednesday afternoon.

Wednesday
The morning of the Mountain Fire’s third day began calmly. Planes, including DC10s, were dropping retardant in Garner Valley and helicopters were dipping water out of Lake Hemet. The fire had flanked and moved north into the wilderness above Idyllwild and south into Palm Canyon

But suddenly around 1 p.m., a plume of smoke began to build in the San Jacinto Wilderness and spread in all directions — imitating a nuclear explosion. This event heightened fire official concerns and rumors of an evacuation began to circulate.

About 4 p.m., the Trails End community at the very top of Morris Ranch Road in Garner Valley was placed under an immediate evacuation notice. Hemet and Hamilton high schools were offered as evacuation centers.

In less than hour, an immediate evacuation of Idyllwild and Fern Valley was ordered. The next day, Riverside County Sheriff’s Capt. Scot Collins reported that compliance approached nearly 95 percent.

The initial order targeted Idyllwild east of Highway 243, but that was quickly extended to the entire town.

Thursday
The Mountain Fire was creeping north along the Pacific Crest Trail and east of there. Fire officials recognized the threat to the town developing and declared, “Today’s priority is to keep [the Mountain Fire] out of Idyllwild.”

They promised “to paint the Mountain red.” Air tankers, nearly a dozen, dropped thousands of gallons of fire retardant from the Wellman Divide and Strawberry Cienega areas over Saddle Junction and down the South Ridge.

“The most active parts of the fire are near Red Tahquitz Peak above the community of Idyllwild and near the community of Trails End to the south. These two areas will be the focus of today’s firefighting activities as both air and ground crews work to slow the rate of spread of the fire,” said John Miller, Forest Service public information officer.

For weeks, California and Riverside County fire officials had consistently warned residents that fires this early in the fire season were behaving as if it were late September or October. The lack of rainfall, not just this winter and spring, but the sparse moisture last year have created very volatile conditions — stronger and much more unpredictable fires.

“If it were any other year, we probably wouldn’t have had to do this,” said Norm Walker, Idyllwild resident, retired fire chief of the San Jacinto Ranger District and a member of the Incident Command Team.

Officials were concerned that drifting embers could move the fire too quickly and an evacuation could jam the roads when emergency vehicles needed to be moving into town.

That afternoon, fire team officials held a press conference in Idyllwild. By then the Mountain Fire was the number one priority in the nation, Incident Commander Jeanne Pincha-Tulley told the assembled media corps.

Fire team officials remained concerned about the fire’s expansion and the possibility of embers thrown into unburned areas as well as the residential and business neighborhoods.

Exacerbating fire officials’ concerns was the forecast of monsoonal weather that weekend. “There’s no guarantee of rain, and it could bring winds and lightning,” she said.

The existence of fire plans, including evacuation plans that the Mountain Area Safety Taskforce had prepared over the past several years, was credited with the overall success of the previous day’s evacuation. Their existence saved much time, according to Pincha-Tulley,

“They paid for themselves over,” declared Walker.

Friday
While the Mountain Fire’s growth was limited Thursday, Friday morning brought grave concern about its possible turns as a result of the winds predicted to accompany a monsoonal weather pattern.

And while the possibility of increased moisture might have dampened the fire, the northern edge was still growing slowly and headed toward San Jacinto Peak, according to team fire behavior expert Dennis Burns.

On Thursday, Riverside County had proclaimed a local emergency because of the Mountain Fire. The next day, Friday, Lt. Gov. Gavin Newsom issued a state proclamation of emergency.

The fire continued to have bursts on the northern boundary within the San Jacinto Wilderness and in the direction of San Jacinto Peak. Spotting — where embers ignite fuels on landing — rather than walls of flames spurred the fire’s movement.

Consequently, fire officials issued an evacuation warning for Pine Cove. Residents were asked to be ready to evacuate if the Fire continued moving north or the easterly winds became stronger.

Saturday
The day began similarly to Friday with cloud cover and higher humidity.

Fire officials reported that Friday night was relatively quiet. Fire lines were established along South Ridge. Many crews were being staged in Idyllwild in case of a sudden change.

For the first time, fire officials decided to insert hotshot crews into the wilderness. They would use the Palm Springs Tramway to enter the back country and begin work on the northern tip of the Mountain Fire. They might, if it was safe, establish a “spike camp,” according to Norm Rooker, a team information officer.

Pincha-Tulley briefed the congressman on the fire’s status, its start and progression during the week as well as the decision to impose an evacuation. She stressed that the fire had been moving 5,000 acres each day at the beginning and a weather change was predicted. Evacuation was prudent and a safety need.

Hawkins recommended that Ruiz try to help secure funding to maintain the fuelbreaks that have been constructed around town. “We want to assure funding for public safety,” Hawkins implored Ruiz.

The congressman promised to amplify the voices of the incident team and the local officials who have spent years and endless hours to ensure the Hill’s protection. “Except for your preparation, more homes and people could have been injured and devastated,” he said. “I will inform all levels of government, including the White House, of the extraordinary teamwork and collaboration.”

Sunday
Rain fell on the Mountain Fire Sunday morning. Total rain was between 1 inch and 1-1⁄2 inches depending on the location.

A sense that the tide had turned began when the Incident Management Team announced plans to begin releasing resources, including seven of 11 Type 1 helicopters.

Then in mid-morning came the announcement that the Idyllwild and Fern Valley evacuations were to be lifted. Residents would need to secure a permit to re-enter before 11 p.m. After that, no restrictions would be applied.

In the afternoon, the Riverside County Sheriff’s Office held a press conference at the Lake Hemet station to formally announce the lifting of the evacuation order and the evacuation warning for Pine Cove.

“This area will open to the public by 11 p.m. tonight,” Capt. Scot Collins affirmed. “There will continue to be patrols of heavy sheriff presence.”

Sunday’s extensive rain accelerated the fire’s containment two to three days, according to Pincha-Tulley. Without the rain, the evacuation orders may not have been lifted until Sunday night or Monday.

Monday
Monday morning began with sunny skies over Idyllwild and the noise of traffic moving through town. As people began to return to homes and businesses, thoughts of gratitude dominated the need to recover from the forced four-day leave of absence.

Rain fell again Monday afternoon. And the population of the fire team was nearly half its peak of 3,500. 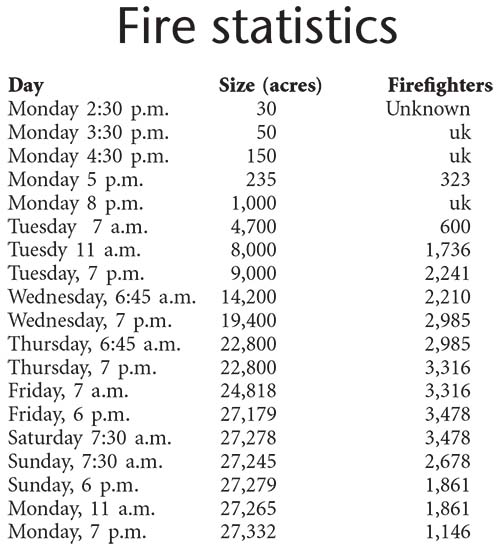