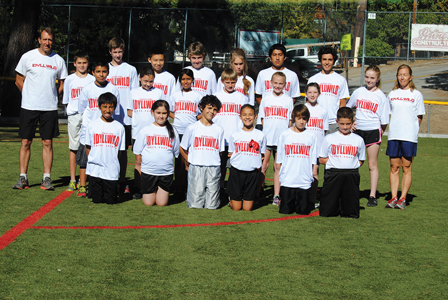 Cross-country running has returned to Idyllwild Middle School a second year under the guidance of volunteer coaches Lee Arnson and Misty Hitchcock. The team competed against other local middle schools last year, the first time in nearly 15 years.

“The beauty is that everyone gets to run,” Arnson said. He credits Hitchcock with initial efforts to revive the sport. The coaches have the students running three times a week. Each practice begins with extensive stretching and warm-ups.

This year, the team has doubled, from 10 to 21 runners. Two of last year’s participants — Riley Arnson and Micah Hitchcock — are freshmen at Hemet High School and running for the school’s varsity team this year.

Last Monday was the team’s first 2013 meet. Everyone got to run and five of the students brought home medals, Arnson said. Three more middle school meets will be run this fall.

The team is planning a jog-a-thon after school for Wednesday, Oct. 30, to raise money for entry fees, transportation and team shirts. “We’d like to avoid draining the school’s funding for other extra-curriculum activities,” Arnson said, explaining the fundraiser’s purpose.

Besides Riley and Micah, juniors Jayden Emerson, Chad Schelly and Tanner Torrez, all from Idyllwild, are members of the Hemet High School varsity cross-country team.

J.P. Crumrine can be reached at [email protected]