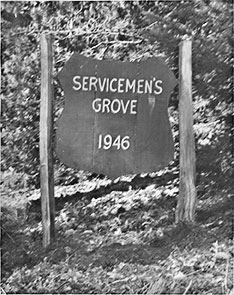 Directors of the Idyllwild Chamber of Commerce voted to “reforest” the San Jacinto Mountains with Sequoia Giganteas.

Dr. Max Krone was in Germany acting as director of music for the U.S. Army schools in Germany, France and Italy.

Chamber of Commerce membership stood at 446, of which 82 were business memberships.

Seventeen people were running for eight  water board vacancies. A Town Crier editorial commended the “public-spirited citizens” for running for positions which were “unpaid, time-consuming, often thankless jobs.”

After a six-month search, another physician was found for the mountain area. Dr. David H. Reid of Weston, Mass., a family practitioner for more than 30 years, declared his intention to move to the Hill as soon as possible.

The Hemet Unified School District governing board announced it would hold meetings in the Idyllwild and Anza communities in an effort to solicit more public input on the location of a proposed mountain-area school.

Nearly $2 million worth of fine cars — 25 Ferraris — were in Idyllwild when members of the Ferrari Owners Club from  Los Angeles stopped for lunch.

Local fisherman “Grandpa Duncan” caught a 21-pound catfish from the shore of Lake Hemet. He was on a roll, having recently caught a 23-pounder and a 20-pounder.

Singer/Songwriter Jack Tempchin was scheduled to perform during an intimate show at the Rustic Theatre on Dec. 6.