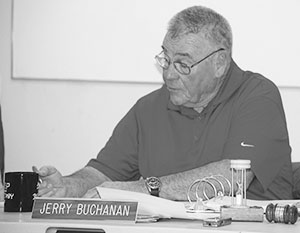 Idyllwild Fire commissioners chose Jerry Buchanan (left) to be president for the next 12 months. Buchanan was board secretary. He succeeds Jeannine Charles-Stigall, who was president since November 2011 and for 10 months during 2010.

Larry Donahoo is the new vice president, succeeding former Commissioner Dr. Charles “Chip” Schelly, and new Commissioner Rhonda Andrewson is secretary. Each of the officers was elected by acclamation.

At the January meeting, the commission will consider whether to re-establish a treasurer’s position. Buchanan distributed a draft policy for this purpose and urged the commission to consider it. The treasurer would also become chair of the new Finance Committee, which will begin meeting early next year.

One of the new commission’s first actions was to eliminate the second meeting of the month. Going forward, the IFPD Commission will meet at 6 p.m. the second Tuesday of each month, starting with the Jan. 14 meeting. The commission has been meeting at this time but will no longer hold a regular meeting on the fourth Tuesday.

While the whole commission agreed that twice a month was too frequent, Layton recommended the meeting remain on Tuesday because the “community is accustomed to it.”

On the Labor Relations Committee, Andrewson will be the second member along with Buchanan. Layton and Charles-Stigall volunteered for the Finance Committee.

The district’s budget is also in a transition from a cash basis to an accrual basis. Buchanan explained that this is the recommendation of the district’s auditors.

“We’re still talking about what should be accrued and when,” Buchanan stated. “For example, how should we post property taxes and when? And how would we deal with the tax advances?”

One difference this will make is the appearance of a new expense item for bad debt. This will be the amount IFPD cannot collect from medical insurers, such as Medicare and private insurers, for ambulance costs.

On the revenue ledger, the “Ambulance Service” line will represent the amount IFPD would bill for transport according to its rates. It no longer represents actual collections. For the most recent financial report the district reported ambulance revenue of $326,000 compared to a budgeted amount of $333,800. However, the budgeted amount was based on expected cash collections and the reported amount is considered the hypothetical fees if the full transport cost were charged and collected. Through November, the “Bad Debt” amount was reported as $150,000.

Much of the more-than three-hour meeting was devoted to reviewing existing policies regarding commission function and operation.

In preparation for developing an agency strategic plan next year, the commission approved sending Chief Patrick Reitz and several commissioners to a strategic planning workshop in Rancho Mirage during the last week of February.

The commission presented plaques to former commissioners Peter Capparelli and Schelly for their service and commitment to the district. Both chose not to seek re-election this year.

J.P. Crumrine can be reached at [email protected]