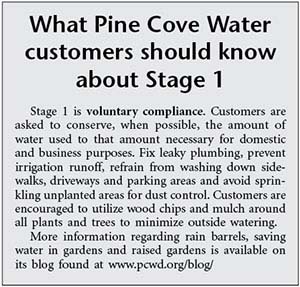 Concern over lack of water was not Holldber’s reason for recommending the Water emergency action.

“We’re not running out of water and we have not sold a water meter in the last four or five years,” Holldber said. “The State is making a recommendation to cutback 20 percent, but I’m not saying cutback. But be aware and use wisely.”

Holldber stressed that this action would not penalize retirees or single parents. In stages 2 and 3, users of more than 18,000 gallons would begin to see higher rates.

Speaking at the public hearing, Norm Cassen, Pine Cove resident and district customer, urged the board to reject the declaration.

“I thought there was plenty of water. What about the new wells?” he asked. “There’s so little usage.” Cassen recommended better communication between the District and its customers. “More than just a newsletter every two months along with the bill,” he said. “Real conservation takes more than rationing.”

He also urged the District to apply for grants being funding from the State’s recent drought emergency legislation.

The directors did not hesitate and said their action was the prudent step.

“The first step is educational,” stressed Director Robert Hewitt. “While I’m hearing at meetings we’re ok, I’m getting nervous. To not do this would be negligent and incompetent. We don’t have a crystal ball.”

During the first two months of 2014, PCWD produced 4.1 million gallons of water compared to 4.9 million in 2013. While total production last year increased 2.3 percent more than 2012 and much of that occurred in January and February, the 2014 production for these two months was nearly 900,000 gallons (17.5 percent) less.

The District’s static well no. 10 dropped 5 feet since the beginning of the year. In normal years, the well may drop during the fall and early winter, but it recovers in spring, which is unlikely this year due to the lack of rain or snow, Holldber predicted.

Later in the week, Lee Arnson of Riverside Mountain Rescue Unit confirmed the unlikelihood of well replenishment this spring. During a recent flight over the Hill, he saw only patches of snow near Saddle Junction. While the peak was covered, it was not deep, he noted.

To disperse the demand on the District’s well sources, Holldber indicated he planned to restart the District’s plant at Dutch Flats in order to use the water from those wells.

The possibility of adding the Stonewood community to PCWD’s customer base will still be pursued. A letter inviting those residents to a meeting to discuss and then explain the costs associated with a possible annexation was mailed Monday, March 17.

In response to a Director’s question, Holldber assured the board that if the annexation occurred it would have no effect on the District’s water supply.

“They have their own well and tank?” asked Director Dee Eskew. “So we’re not giving up any Pine Cove water?”

Holldber agreed with Eskew on both points. “It’s a negative impact if they join us,” he emphasized.