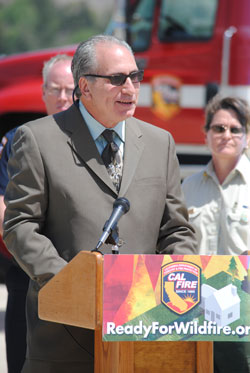 Last week, the Town Crier interviewed 3rd District Supervisor Jeff Stone, who is a candidate for the State Senate District 28 seat. There are four other candidates — Phil Drucker, Bonnie Garcia, Glenn Miller and Anna Nevenic  — and the two top vote getters, regardless of party affiliation, will be on the November General Election ballot.

Town Crier: What are the important issues facing the state in the next four years?

Jeff Stone: “Our economy and jobs are the most important. California used to be the fourth largest economy, but no more. Toyota is packing up and taking 3,000 jobs to Texas.”

In April, Toyota announced it was moving its U.S. headquarters from Torrance to Plano, Texas, a Dallas suburb, over the next three years.

“We’re losing employees who paid taxes for benefits for other state residents,” he stressed, describing the affect on the State and why job creation and retention are important state issues. “We’ve got to start competing,” he urged, “and get out of this economic debacle.”

Stone’s concern is that as the state loses more jobs there are fewer people with jobs who can help the portion of the public who rely on government services.

“As a result of [Assembly Bill 109, jail realignment] we’re putting people in state jails that are not equipped for it. The State is in the business of building jails now.”

TC: Do you believe the budget problems are over?

JS: “The problem is not over,” he said. “There’s a $2.5 billion surplus in the state budget that the Assembly can’t wait to spend.”

Stone supports the Rainy Day fund, “… which puts money away in the event of another cycle of bad economy.” Besides current spending, Stone pointed to the long-term debt overhanging the state’s credit rating, which need to be controlled. The largest and most ominous are the state’s pension obligations, according to Stone.

“The government can no longer have defined pension plans which are backed by taxes,” he said. “We need to keep promises to existing employees, but change the plans for the future.” He recommended a pension plan similar to a 401(k) plan, “…where the taxpayers are not on the hook if the stock market rises or falls. The golden days of gold plated pensions are over. We’ll need affordable pensions in the future.”

TC: How will you judge your success?

JS: “Obviously by the reform bills, which I plan to put forward. I’ll work both sides of the aisle to enact changes that make Californians self-sufficient and able to achieve the American Dream.”

Stone’s goal is to turn around the recent spate of announcements of businesses such as Toyota and Occidental Petroleum Corp. moving their headquarters to Texas. In addition, he will seek to expand jail space so convicted criminals serve their full sentences and will also seek pension reform.

TC: Can you help the district from the position of a member of the minority party?

JS: “Really believe I can. I’ve worked with different political officials throughout the county and we’ve effectuated good policies. We found common ground.”

Partisan gridlock is a ridiculous phenomenon, in Stone’s opinion.

TC: State water crisis, if it continues, your short and long term solutions?

JS: “I want clean water and clean air, but environmental regulations are extremely toxic to business creation.” To address potential water shortages and future droughts, Stone advocates building more dams for storage. He also is considering greater investment in and desalination plants such as the one under construction in Carlsbad and similar to the ones built in Israel and elsewhere.