On June 6, 2014, deputies from the Hemet Station were dispatched to the unincorporated community of Anza to investigate a male adult in a pickup truck chasing a teen-aged male on dirt bike. Deputies located the teenager who stated the adult who chased him was his previous employer, 51-year-old, Randy Morasch.  During the course of the interview, deputies learned the teen-aged male was the victim of previous sexual assaults by the male who chased him.

The case was turned over to investigators who on June 9, 2014, served a search warrant on the suspect’s property on Secret Falls Road, in Aguanga. The suspect was not found on the property during the warrant service. Evidence collected inside the suspect’s residence corroborated the victim’s statement’s and an arrest warrant was obtained for Randy Morasch. The arrest warrant, #SWF1400818, was issued with a bail amount of $500,000.

Randy Morasch is a white male adult, approximately 5’6” tall, and 150 lbs. He may be driving a lifted, blue, Ford pickup, or one of numerous off-road vehicles he may have access to. Anyone with information concerning the whereabouts of Randy Morasch is encouraged to call 911 and provide his location.  Investigators have reason to believe additional victims may exist. Anyone with information concerning this incident, or any others concerning this suspect are encourage to contact Investigator Janecka, at (951) 791-3400. 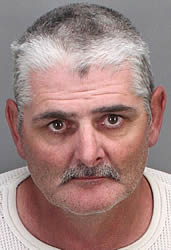