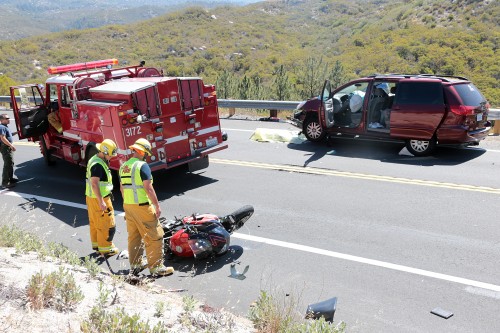 According to CHP Officer Chris Blondon, an unidentified male, aged 34, of Beaumont was riding his 2003 Honda CBR900RR motorcycle east on Highway 74 just below Mountain Center near mile marker 56.6 at about 9:45 a.m. Saturday when he lost control, drifting into the westbound lane. A group leaving church camp from Idyllwild Pines was traveling westbound en route to El Cajon, in their 2007 Toyota Sienna LE when the motorcyclist collided head on, pinning the motorcyclist under the van. First responders and witnesses used a jack to lift the van to free the motorcyclist, and CPR was administered. He was pronounced deceased soon after. All seven passengers and the driver of the van were uninjured. Highway 74 was closed in both directions from Mountain Center and near Cranston Forest Service Station for about three hours while the scene was cleared. Photo by Jenny Kirchner