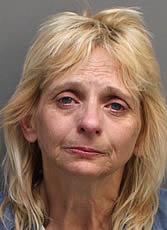 A grandmother visiting family in Garner Valley pleaded guilty and was convicted July 8 of willfully harming/injuring/endangering her 2-year-old granddaughter’s personal health after the grandmother left a cup of methamphetamine-laced tea unattended on a counter and the child drank some of the contents on the night of June 29. Besides the felony, Cynthia Ann Watson, 51, of Aloha, Oregon, was convicted of a misdemeanor, possession of controlled substances.

The mother tried to put her daughter to bed on June 29 “but she would not fall asleep,” according to a Riverside County Sheriff’s report. “Her daughter was talking rapidly, scratching her skin, could not sit still and was very agitated. Thinking there might be some medical issue with her daughter, the reporting party took her to a local hospital to be examined. Over the course of the evening, the examination revealed the child tested positive for methamphetamine in her system.”

Through the course of the investigation at the Pine Street house the next day, deputies discovered that Watson had made a cup of tea the night before and placed methamphetamine in the tea to get herself high. She was arrested that day.

The Riverside County Superior Court sentenced Watson to 50 days in county jail, then 43 days to be served in a work-release program. She is required to pay victim restitution to be determined by the Probation Department.

She also may not possess any controlled substances without legal prescription and has to submit to tests and searches by probation or law enforcement officers.

She also is restrained from having any direct or indirect contact with the family, as well as other restrictions and requirements, such as enrolling in a child-abuse treatment program, gainful employment or full-time education, and not leaving the state of California without the Probation Department’s written permission.

Becky Clark can be reached at [email protected]