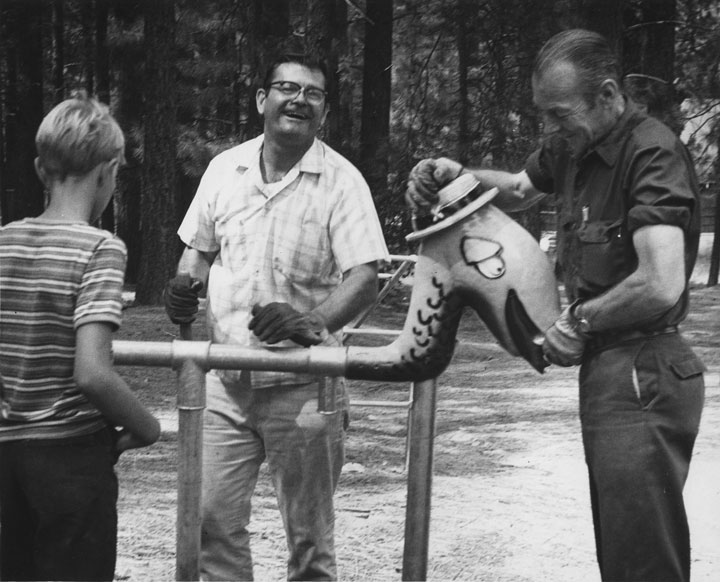 An early October snowfall left 3 inches of snow on the ground.

There was dancing every Saturday night at the Pine Cove Lodge.

A free “trans-ocean telephone call” to Hawaii or Alaska would be offered to someone at the next Rotary meeting. The audience would listen in on loud speakers.

Cable television franchised by the Riverside County Board of Supervisors was being offered on the Hill.

Volunteers were being sought to help the Forest Service repair the Scenic Trail before winter. Little or no regular maintenance had been done on the trail since being built 10 years previously.

A joint, all-out, seven-day-a-week fire patrol effort was initiated locally by the U.S. Forest Service and the California Division of Forestry. Members of the Fire Watch units would patrol on the ground and in the air every day until the close of fire season.

Riverside County Sheriff’s deputies again raided marijuana fields in Anza, seizing $10 million worth of pot and arresting 12 people. It was the latest in a series of raids that had begun in August.

Prices for some products offered at Fairway Supermarket: Bananas, 5 pounds for $1; carrots, 1 pound for 25 cents; and onions, 6 pounds for $1.

Larry Bischof, owner of Harmony Farms Nursery, was told by Riverside County Road Department officials that he had to give the county right-of-way on 15 feet  of his land for future expansion of Highway 74 from a two-lane to a four-lane highway.

About 150 people demonstrated along a stretch of Highway 243 to express their opposition to abortion.

Residents were stunned by the deaths of three young teachers from the Desert Sun Science Center’s Astrocamp. They were killed in a traffic collision while changing a flat tire on the Long Beach 710 Freeway.

About 40 volunteers, many of them kids, spent 20 hours raising the skate ramps for the Idyllwild Skate Park and the long-awaited skateboard park was opened.

Beginning Oct. 15, the Idyllwild Business Roundtable was to premiere “3rd Thursdays!” with participating Idyllwild merchants aiming to entice local shoppers by staying open until 8 p.m., offering special treats, giveaway gifts or entertainment, and donating a portion of each 3rd Thursday’s sale to a local nonprofit.

A Santa Ana wind event combined with near-record low fuel moisture posed a substantial fire threat through the prior weekend.