Home Columns Before Our Time Before our Time: Sawmills were common in the forest …
Facebook
Twitter
Google+ 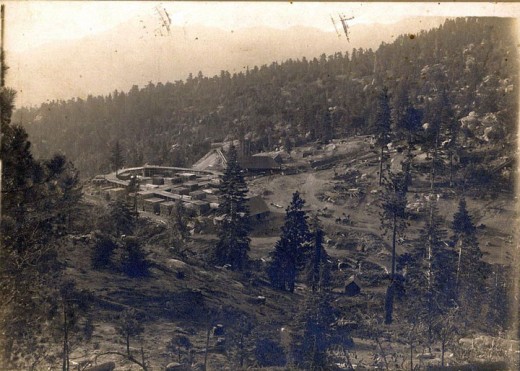 Between 1875 and 1900 loggers and sawmills were the dominant human activity in the San Jacinto Mountains. They appeared first on Indian Creek in Hall Canyon, now home to Lake Fulmor and the James Reserve, then along Fuller Mill and Strawberry creeks. Once steam engines replaced water wheels, logging camps spread into the forest beyond the creeks.

At least 18 different sawmills can be documented in these mountains. Exactly where each was located is typically a mystery.

Structures were often built to be readily disassembled, then reassembled at a new location, so most of the mills have left no trace on the landscape. Even the most recent one, which operated in Idyllwild for many years after 1920, is omitted from a 1928 village map so detailed that it depicts every existing cabin.

Solving such mysteries is the kind of detective work that appeals to the ex-scientist in me, but clues are rare and unpredictable.

News stories were vague about locations. Discovered artifacts are meaningful only if they remain in their original location. Old photographs sometimes help, but only if they’re reliably labeled or show permanent features like boulder formations or nearby ridge lines. Oral tradition is occasionally useful, but human memory is tricky.

The simplest case, the 1882 mill built on Saunders Meadow by Anton Scherman, the dominant logger between 1880 and 1900, is clearly labeled and dated in an archive photo.

In the case of Fuller’s Mill on its namesake creek inside the private Pinewood community, the clues were a remaining structural foundation and a misidentified but descriptive 1895 photo. Scherman’s 1889 mill site on Dutch Flat was pointed out by some descendants who visited the Idyllwild Area Historical Society Museum.

My curiosity was rekindled recently by an inquiry from local botanists Dave Stith and Tom Chester. So with the help of Tom and others I’ve been researching another foundation, at Sawmill Flat on the trail between Marion Mountain Campground and the private Thousand Trails RV camp in Pine Cove.

Tediously comparing unidentified archive photos with Google Earth images and on-site photographs, we’ve finally concluded that this was the so-called Dark Canyon sawmill (1908-1922), which Hiram Roach operated for the San Jacinto Lumber and Box Company. The clincher was discovering a map depicting the footprint of a major 1914 wildfire ignited by smoldering sawdust at the Dark Canyon mill; the footprint’s shape clearly places the origin at Sawmill Flat.

Then we repeatedly visited a nearby meadow littered with old cable and rusty metal, consulted archive photos of Scherman’s 1895 Stone Creek mill, especially a well-documented 1898 image from the Southern California Historical Society, and eventually deduced a likely site. There I happened upon a heavy iron object, long half-buried, that could be a crucial piece of the steam-powered machinery shown in one photo.

Another puzzle involves a Scherman mill, his last, set up in Fern Valley in 1900. Neighborhood tradition and a recently discovered band-saw blade suggest it may have been somewhere near the top of John Muir Road. Can anyone out there offer another clue?

Bob Smith is a researcher and archivist with the Idyllwild Area Historical Society. He welcomes comments, questions, corrections and suggested topics for this column at [email protected]