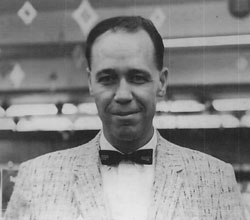 Delbert “Bill” Motley Sandlin left this plane for his great reward at 5:05 p.m. Tuesday, Nov. 4, 2014. He was at home with his family at the end of a long combat with cancer and cardiovascular disease.

Bill came to earthly being at home in 1932 as the 12th living and final son in his family in Motley Ranch, Texas. It was not widely known that he spent some of his young life “riding the rails” after being orphaned at 7 years old. He had a lifelong fascination and love for trains.

Bill married Helen Kathryn Roble in 1953 and they had two sons, William Joseph and David Austin. He concurrently attended the “School of Hard Knocks” and graduated with honors. Bill worked in various positions at Chicago Bridge and Iron Company in New Jersey, Kaiser Steel in Fontana, Fontana School District and Abitibi Corp. in Ontario, and purchased and renovated the Fern Valley Inn. He received commendations for developing a chemical injector system and started Sandlin & Son Refrigeration with his son, David. A significant time of Bill’s life was supporting his son, William, after a serious car accident and long recovery period.

He and his family loved travel. They saw the United States extensively and liked shopping in Mexico and touring New Zealand. Bill also enjoyed taking a trip to Laughlin, Nevada and was considered to be lucky.

After successfully raising his sons and enjoying their life successes, Bill retired with Helen in Niland, near the peaceful Salton Sea. He kept busy with building a train set for his grandchildren, woodworking and helping his neighbors. He always kept busy.

Bill met his partner to the end, Veronica “Roni” Neisner, in Niland a couple of years after the passing of his wife, Helen. They also traveled together and Bill greatly enjoyed Roni’s great sense of humor and zest for life. They eventually settled in Indio and continued to both be very busy people. Bill is survived by Veronica “Roni” Neisner, his loving partner since 2003; David Austin Sandlin, his loving and respectful son; Rebecca Finnell Sandlin, daughter-in-law; Gennesse Lynn Sandlin, granddaughter; Elizabeth Leigh Finnell, granddaughter; Dominic Gabriel Sandlin, great-grandson; Benny and Sandra Sandlin, nephew and his wife; and Rusty, his faithful canine friend and confidant.

Bill is predeceased by Helen Sandlin, wife of near 50 years and William Joseph Sandlin, his son.

A Celebration of Life service will be held at Bermuda Palms Mobile Home Park, 80-870, Hwy. 111, Indio, from 1 to 4 p.m. Sunday, Dec. 7, in the clubhouse. The six words that best describe Bill’s life are, “Gentleman who traveled life his way.” If you would like to pay honor to Bill, chat with a neighbor or compliment someone, as he often did.