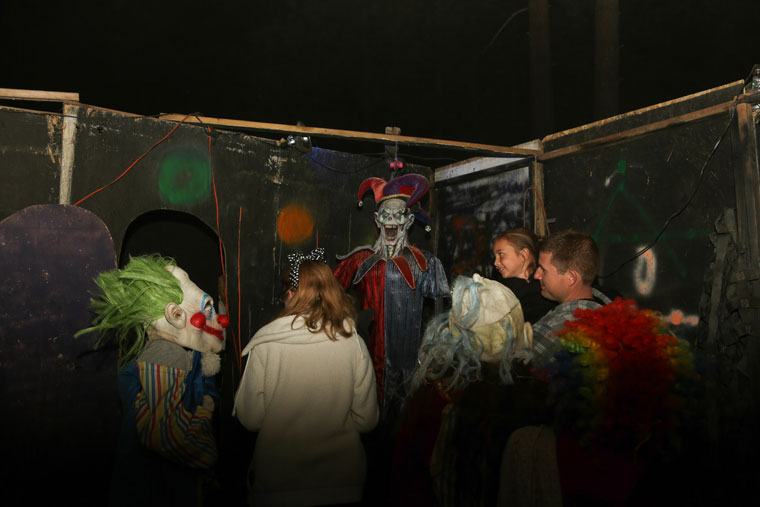 For 11 years, Kathy Wilson’s Idyllwild Ghost Town has frightened and delighted fans of the phantasmagorical from on and off the Hill.  Now, year 12 is in doubt.

Wilson’s month-long Halloween attraction, a walk through live action and animatronic spook fest, had firmly established itself as a major audience draw at the Idyllwild Community Center site.

But a change of venue this year, to behind the Rustic Theatre, resulted in fewer attendees. Wilson said the event was still successful in its mission of raising funds for the Idyllwild School PTA, but that attendance was down by about 25 percent. “It was a decent crowd, but not like the past,” said Wilson.

She thanked Rustic Theatre owner Shane Stewart for providing a stopgap venue for Ghost Town, after the ICC board decided not to continue to host the event. Chris Trout, ICC spokesperson, explained that growing and expanded use by community residents and groups of the ICC property, as well as planned community center construction on the site — especially because of the set up and tear down time of the temporary facility and month-long use during good-weather recreational days.

Wilson said she appreciated Stewart offering to host the event this year. “Shane was great,” she said, but noted plans for a 2015 Idyllwild Ghost Town are currently on hold.

Wilson said another consideration in whether to continue Ghost Town is that the execution of the event, especially constructing the temporary facility, is time-consuming and work-intensive. “Construction is a great deal of work and often lands on my family and friends, and that is just too much,” she explained. “In the past, I’ve had a crew that was wonderful, but this year I had a new crew and a new location, and it was difficult.”

Asked why she does this, when the net profits have gone to worthy causes in town and not to her company, Wilson said, “I do it for the kids, to see their beaming faces. I do it for the joy of seeing adults and tourists who come out and have no idea our small town can produce something on this scale. I like to stand at the exit door and see their expressions as they come out of the structure.”

Wilson said she’d look at options for the future of Idyllwild Ghost Town, including venues where a permanent structure could be built, but at this point she just does not have a plan.

She also is considering a new event aimed more at young teens and young adults, giving them something to plan and execute, but nothing at this point is on the drawing boards.

“It’s important to work with the town and be positive,” she said.

Wilson stressed she is interested in hearing from the town regarding the future of this event — suggestions and comments. She can be reached at 951-659-3228.