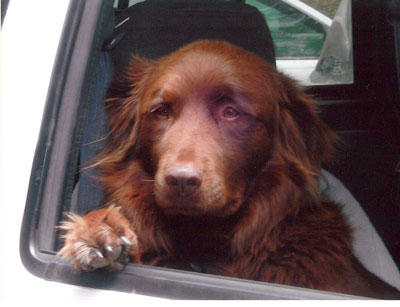 Stitch lived a fine and loving life until he succumbed to cancer on Dec. 19, 2014.

He will always be remembered for his devotion to his families, his love of Pine Cove and leadership among the canine population.

Born July 5, 2003 in Pine Cove, Stitch had, as many local residents do, two homes — on and off the Hill. He accompanied his beloved family, the Torrez’s (Tanner, Sage, Kristen and Art) to Hemet when the younger ones, Sage and Tanner, were ready for high school. When in Hemet, Stitch loved hiking trails with his mother and many friends.

But he loved the Hill and Pine Cove and continued to live with his other family — Jerry and Katie Holldber.

Here in Pine Cove, Stitch was a familiar site at the water district office and in the PCWD truck with his buddy, Jerry, where he had many responsibilities. As long as he served as sergeant of arms for the district, there has never been a boisterous or unruly meeting.

Board members and residents respected his calm but stately demeanor for which he set a tone that was easily followed. But he also helped with assignments outside the office, too.

Stitch also will be remembered by his stepbrother, Chico, and his many friends on the Hill, including Monk, who always viewed Stitch as a mentor.

His families — Kirsten, Art, Sage and Tanner, and Jerry and Katie — along with many, many others, will never forget their faithful and loving companion. While the separation is painful for those who remain, the memories are comforting.

Just this side of heaven is a place called Rainbow Bridge.

When an animal dies that has been especially close to someone here, that pet goes to Rainbow Bridge.

There are meadows and hills for all of our special friends so they can run and play together.

There is plenty of food, water and sunshine, and our friends are warm and comfortable.

All the animals who had been ill and old are restored to health and vigor; those who were hurt or maimed are made whole and strong again, just as we remember them in our dreams of days and times gone by.

The animals are happy and content, except for one small thing; they each miss someone very special to them, who had to be left behind.

They all run and play together, but the day comes when one suddenly stops and looks into the distance. His bright eyes are intent; his eager body quivers. Suddenly he begins to run from the group, flying over the green grass, his legs carrying him faster and faster.

You have been spotted, and when you and your special friend finally meet, you cling together in joyous reunion, never to be parted again. The happy kisses rain upon your face; your hands again caress the beloved head, and you look once more into the trusting eyes of your pet, so long gone from your life but never absent from your heart.

Then you cross Rainbow Bridge together.