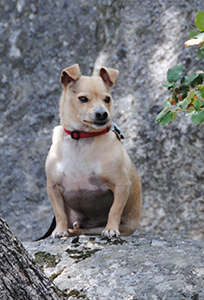 Cooper, beloved chiweenie and a native of Idyllwild, passed away unexpectedly due to cardiopulmonary complications on the morning of Sunday, Aug. 18, 2013, at Anne Arundel Veterinary Emergency Clinic in Annapolis, Md.

Cooper was adopted from Animal Rescue Friends (ARF) of Idyllwild by Lt. Kirk Fistick, USCG, and his wife, Carrie, during the summer of 2011. Cooper and his owners spent two short but adventurous years together exploring the Southwest and, of course, taking Cooper home to the San Jacinto Mountains for some weekend camping.

Cooper helped welcome his owners’ daughter into the world and begrudgingly moved to the East Coast in the spring of 2013 with the family’s military transfer.

Cooper will always be remembered when he was at his happiest ­— traveling in an RV to bask in the sunny warmth of the deserts and high country of Southern California.