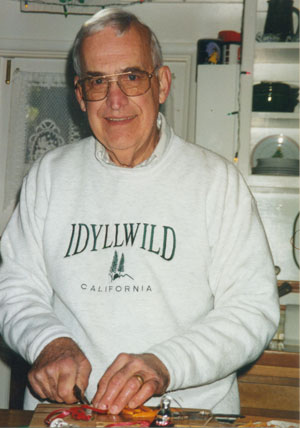 Don spent summers with his family on the Mattole in a cabin at the Roscoe place. He always recalled those days, fishing and being barefooted all summer long.

At age 17, he enlisted in the U.S. Navy and served on the USS Cowpens, which was converted to a hospital ship to bring the men home from the war. When he returned home, Don attended Humboldt State College, earned his teaching certificate and taught at the Rio Dell Junior High. He met the love of his life, a red-headed usher at the Eureka Theater. Don and Margaret “Maggie” Collson were married in 1950 and Don went to work at Arcata Lumber as an accountant.

In 1968, Don and Maggie packed up the five kids and moved to Thermal, California. Here Don worked at True Value Lumber, where connections with Humboldt County made it possible to bring the best redwood lumber to the Coachella Valley. While living here, Don and family built a beautiful cabin home in the mountain village of Idyllwild. Don and Maggie moved to Idyllwild permanently in 1982 where they hiked the mountains and sang in a choir at ISOMATA. They opened a craft boutique in town and traveled often to find unique items for the shop.

Following Maggie’s all-too-soon passing in 1991, Don married Roxy Holle and they enjoyed 19 years of retirement living. These years were spent in a number of new places: Borrego Springs, Joseph, Oregon, and Wickenburg, Arizona. Don and Roxy enjoyed being museum docents and singing in choirs, and Don even acted in a play and learned to play dulcimer. In all of his homes, Don was Mr. Fix-it. He always had a knack for carpentry and yard work.

Don was preceded in death by his parents, his wife Margaret, and his brother William “Bill” Chesnut of Berkeley, California. Besides his wife, Roxy, he is survived by his sister Barbara Williams of Orleans, California; his children and their spouses, Donald Chesnut and Cathy Jo Cassidy of Ventura, Thomas and Jessie Ann Chesnut of Idyllwild, Robert and Laura Chesnut of Carlsbad, Melissa and Kenneth Chilton of Ferndale, and Dennis and Linda Chesnut of San Diego. Grandchildren are Cory, Erik, Kristen, Micaela, Kelsey and Patrick. Great-grand children are Emanuel, Belen, Chloe and Lila. Step-children are Mitch and Terri Holle, and Kimm and Thomas Jayne.

Don was a faithful husband, a good provider and a loyal friend. His favorite part of family gatherings was just watching everyone carry on and have a good time. Everywhere he went, Don genuinely enjoyed meeting people and hearing their stories. He will be forever loved.