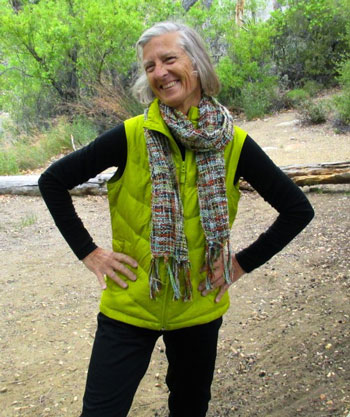 Sabrina Anne Verney, mother, writer, artist, gardener, and teacher, died Wednesday, Nov. 12, 2014, at her home in Idyllwild after a battle with pancreatic cancer. She was 67 years old.

Born in England on Feb. 14, 1947, to John and Jan Verney, she had early interests in drawing and writing. While studying at Camberwell School of Art, frustrated by the values of her rigid English upbringing, and with a desire for deeper spiritual experience, she joined a religious fringe group called The Process, traveling with them from London to Xtul, Mexico, in 1966. After returning to England, she became disillusioned with the group, and later published a book about her experiences as part of The Process. She ran a small bric-a-brac shop in Farnham, studied period costume at Wimbledon School of Art, then joined the theatrical costumers Cosprop in London, and moved with her job to New York City in 1974. There she spent much of her 20s creating costumes for Broadway shows and exploring the country.

In the early 1980s she moved to California to join the Zen Center of Los Angeles, where she met David Reid- Marr. She and David continued practicing Zen, and moved to a remote cabin in the Mojave Desert when their daughter May was born in 1984. They eventually moved to Mountain Center, and then to Hill Street in Idyllwild when their son Adam was born in 1989. After she and David separated, she dedicated herself to raising her children and running a local gardening business. In 2003 she returned to school and earned a BA in Creative Writing from UC Riverside. In 2012 she became an ESL and fashion design teacher at Idyllwild Arts Academy, where she worked until her diagnosis.

Bina, as she was known by those closest to her, cultivated deep and enduring friendships throughout her life, and was appreciated for her direct style of communication, and acute sense of observation. She lived adventurously, and never stopped exploring her myriad interests. She published a poetry CD, had many public readings, and was known for her energy-filled oratory, lightning wit and unforgettable laugh. She had a profound love of the desert, mountains and all wild spaces, was an avid hiker, and traveled broadly. She had a life-long love of sewing, and could often be spotted in her striking, handmade outfits. Her many distinctive sculptures, vibrant textiles and bold ceramics live on in homes throughout Idyllwild and elsewhere. The grace and courage with which she spent the last months of her life, and her willingness to embrace her dying process, was inspiration and solace to all those around her.

She is survived by her children May and Adam, her brother Sebastian, her sisters Juliet, Rose, Candy and Angelica, and her many nieces and nephews.

Before she died, she expressed her deep appreciation for the friendship, generosity and humor of all those she knew. In her final weeks she was surrounded by friends and family, and was, in her own words, “completely at peace.” Her ashes will be scattered in accordance with her wishes.