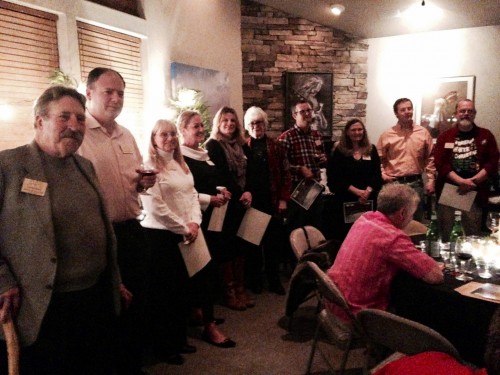 The Art Alliance of Idyllwild Board of Directors voted to resign en masse, effective this Wednesday, at two special meetings held on Friday, April 10 and continued Saturday, April 11.

A quorum was reached and, by more than three-quarters vote of the voting members, a decision was reached to dissolve the current AAI Board of Directors. Board member Kirsten Ingbretsen had previously tendered her resignation for personal reasons, other members did not vote, and one “no” vote was received by proxy.

Here is the board statement: “Because of the current demeanor and continued actions of a few members of the Art Alliance of Idyllwild — and after extensive discussions of the situation and potential ramification to our membership if the situation were allowed to continue to escalate — the Board of Directors of the Art Alliance of Idyllwild has come to the difficult decision to dissolve the current Board of Directors [effective April 15, 2015) and to transfer all power back to the organization’s members so that they may chose their own leaders.”

The official statement directed AAI members to consult the website for statements from individual directors as to their reasons and for additional updates at (www.artinidyllwild.org).

Only Reba Coulter voted by proxy against the board motion. Voting for the resolution to dissolve were President Marc Kassouf, Nathan DePetris, Mark Croudy, Elizabeth Miller, Scott Finnell, Lesly Martin and Bryan Tallent (also by proxy).

From minutes of the meeting, the board outlined its plan for returning control of the highly visible and successful art nonprofit to the membership:

1. Select, from a list of five nominees, an interim administrator, empowered to call a special election for a new board, to be directly elected by the full AAI membership. Although not outlined in the minutes, the interim administrator would have to create a plan and procedure for holding a special election. In the past, the board filled vacancies with no provision for AAI member vote or ratification. Since resignations of the current board become effective Wednesday, April 15, the board planned to select and approve an interim administrator by end of day Tuesday, April 14.

2. According to the minutes of the special meeting dated April 10, the interim administrator would have “limited authority to hold/safeguard all website passwords and keys [P.O. Box, storage], and other information and assets, as well as organize and conduct the Special Membership Meeting to elect the new Board of Directors.” The nominees are, in order of priority, attorney Adrian Adams, law firm of Adams Kessler; Jeri-Sue Haney, Idyllwild BBVA Compass Bank; Chris Trout, AAI founder; Darcy Gerdes, former AAI president; and last, the State of California, its “assigns, departments, counties or delegates.”

Consult the AAI website to view complete board minutes and all resolutions.

As part of board votes, Artists Liaison Finnell was given authority, until appointment of an interim administrator, to temporarily hold all storage locker keys; and, given assessed importance, the board voted to retain on calendar two events — the Jerry Baccaire Artists Series and the Young Adult and Youth Art Show, prepaying venue and any current expenses for both. All other event online registration is disabled, effective April 15. Pending venue contracts with the Caine Learning Center also are canceled, as per board motion.

The board also voted to return responsibility for and management of the 2nd Saturday Art Fair to founders Kim and Scott Finnell. As part of that motion and vote, the board stated that AAI would “explicitly” forgo and not request any reimbursement for any prepaid expenses made by AAI on behalf of 2nd Saturday events.

Regarding the board’s actions, Finnell stated, “This was for the benefit of the members. Given all the controversy, with all of this going on, this board action will allow the membership to choose [a new board of directors], to start fresh.”

Updates will follow as this matter moves forward. Other than calling and conducting a special election for a new Board of Directors, it is not clear what ongoing authority the interim administrator would have if or until a new board is voted in by the full membership.