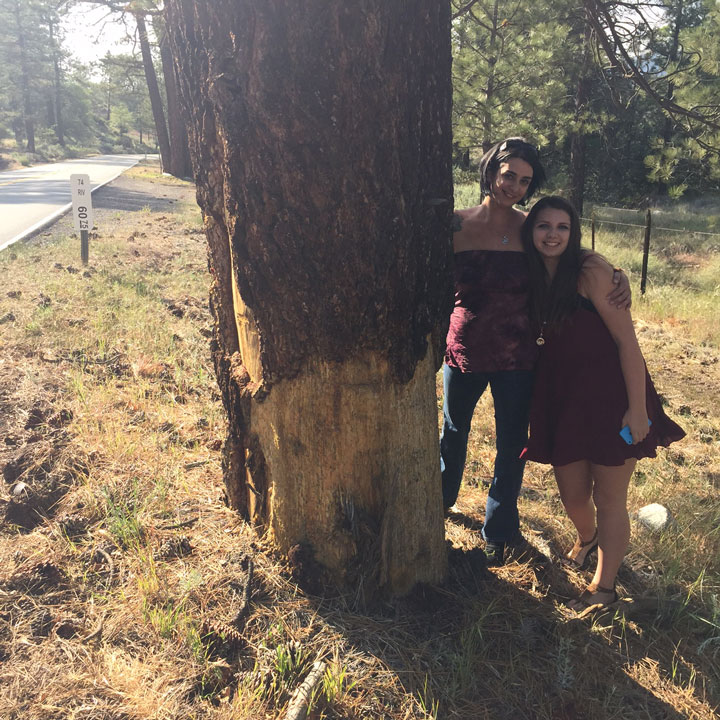 Hill residents are keenly aware of the dangers of driving our roadways and confront that sometimes tragic reminder in the pages of this newspaper.

One particular headline had locals shaken: “Woman loses legs in car crash,” published June 9, 2005 (the first assignment written by this author, back home from college for the summer). The “woman” was a popular and hardworking assistant manager at the Gastrognome and Creek House restaurants: Ana Marie Saenz, 24 at the time and the mother of 5-year-old Josephina.

Saenz had just spent her day off shopping and relaxing in the desert with a good friend. The two had a couple of drinks while out on a rare girls’ day, Saenz admits. They headed up the Hill in the evening and Saenz dropped her friend, who had fallen asleep in the passenger seat, off at her Garner Valley home. That’s the last thing she remembers before waking up three days later in intensive care at Desert Regional Medical Center to a grim reality.

She doesn’t remember the crash at all. Somehow, the 1993 Chevy Lumina she was driving drifted off the road and crashed, on the driver’s side, into a large pine tree along Highway 74 at Keen Camp in Mountain Center.

Saenz was trapped and her car’s engine caught fire. Larry Everitt was the second person to stop and help. As the first person had gone to call for help, Everitt tried desperately to flag down another driver carrying a fire extinguisher. He was finally successful and, with help, put out the engine fire.

Responders from Idyllwild Fire Department and Garner Valley Cal Fire Station worked for 45 minutes on a “cut and rescue” mission using the Jaws of Life before Saenz was freed from the car and airlifted to Desert Regional.

Although Saenz’ blood-alcohol count was below the legal limit when California Highway Patrol arrived at the crash, she said she still should not have been driving.

Her left hip and right elbow were fractured and she lost her left leg below the knee and right leg just above the knee.

“According to my parents, I came to a few times and they would tell me what happened and I’d become hysterical and they’d have to sedate me,” she said. She was in intensive care for three days and required multiple blood transfusions.

Back in Idyllwild, friends and coworkers rallied for Saenz. Her bosses Lanny and Jane Wagstaff organized a fundraising event at the Creek House. Local business and artists donated silent auction and raffle items. Musicians played. The food and drinks were donated by the Wagstaffs and the staff donated their time. More than $18,000 was raised for Ana’s Benefit Fund.

“I’m getting goose bumps just thinking about it,” Saenz said. “My family has nicknamed Idyllwild the ‘Mountain of Love.’” Her parents won an item donated by Everitt’s Minerals at the benefit — an ancient fossilized sand dollar found off the coast of Santa Barbara. She wears it around her neck to this day.

Saenz remained at Desert Regional for about four months then was transferred to California Pacific Regional Rehabilitation Center in San Francisco where she had to “learn how to do everything over again, basically.

“It was scary. We didn’t know how things would turn out. We didn’t know if I was going to be able to walk again. All that, the support and love, gave me so much strength. I really don’t know how my quality of life and my mental state would be to this day without that outpouring of love and support,” she said.

Once out of rehabilitation, Saenz returned to her hometown of Sacramento. She got into her own apartment and was finally able to live independently and still care for her daughter.

She went back to community college and got an associates degree in liberal arts. She then transferred to Sacramento State University and graduated in 2013 with a bachelor’s degree in Environmental Studies. “Before graduating, I landed a volunteer internship with the State Water Resources Control Board for about six months and then was hired on as a scientific aid,” she said. Saenz has been working there in the department of water quality for just over a year.

“I definitely feel like I’m on the right track,” she said. She now gets benefits and fully supports herself and Josephina. “That was a really good feeling telling Social Security to stop sending me checks. And now I also get to give back to the state and the people,” she said. “It’s a good feeling.”

Josephina just finished her junior year of high school and is interning at the Marine Mammal Center, a nonprofit animal hospital in Sausalito.

“Before my accident, my parents brought Josephina into the Gastrognome and she said she wanted to be like mommy and work at a restaurant,” Saenz said, remembering how that made her cringe a little. “Now she’s setting big goals for herself.” Josephina has her sights set on studying marine biology at Humbolt State University.

Saenz said she has hard days and she deals with many challenges. She still struggles with walking on prosthetic legs, so she “relies too much” on her wheelchair. She’s researching better prosthetic options and getting back into physical therapy so she can one day walk confidently again.

“I guess Ana 12 years ago had dreams … different dreams,” she said when asked about her life before the crash. “I wanted to have a large family. I was taking classes at Hemet [Mt. San Jacinto Community College] because I wanted to get a degree in business and open my own microbrewery.”

Now Saenz is working on an advanced degree, although she hasn’t quite settled on a major. She teaches night classes. She likes to go kayaking and camping and loves that she gets to travel a lot for her job.

During rehabilitation, Saenz found comfort in music. She started going to more concerts and eventually met her current boyfriend of five years.

“I’m happy and in love. I’m not stopping here. I’m going to continue to grow and learn and hopefully inspire people to make the right choices and never give up ever,” she said.

Saenz returned to Idyllwild on Mother’s Day this May. She went to the Gastrognome and had one of her favorite dishes, the crab cakes. She gave Lanny and Jane big hugs.

She went to Everitt’s Minerals because it’s one of her favorite Idyllwild stores. She got to hear Larry’s story for the first time and got to thank him face-to-face. Larry and Janet Everitt both got big hugs.

She even went and found that big pine tree … and gave it a big hug.