The growing number of pest-afflicted trees throughout California has forced the Board of Forestry and Fire Protection to issue a draft emergency regulation to hasten the removal of dead and dying trees of any size.

On May 7, Duane Shintaku, deputy director for Resource Management at Cal Fire, wrote to the Board and requested it take action.

“It is in the interest of the State to encourage private forest landowners to remove dead and dying trees on their timberland to reduce the fire risk … , “Shintaku said in requesting the emergency action. “The large number of dead trees creates a fire hazard in both the short and long term.”

The temporary change will accelerate the review process for these projects. The rule justification would exempt a land owner from timber plan preparation and submission requirement, including a completion a report and stocking report.

This emergency rule, which went to the Office of Administrative Law on July 1 and will apply statewide, according to George Gentry, executive director of the Board.

Cal Fire has also indicated to the Board that grants from the State Responsibility Area Fire Prevention Fund will be available to aid the removal of this risk, according to Kevin Conway, staff forester. 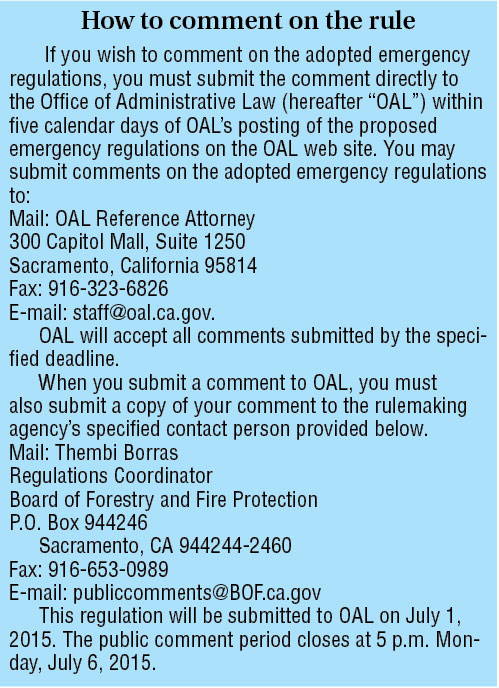