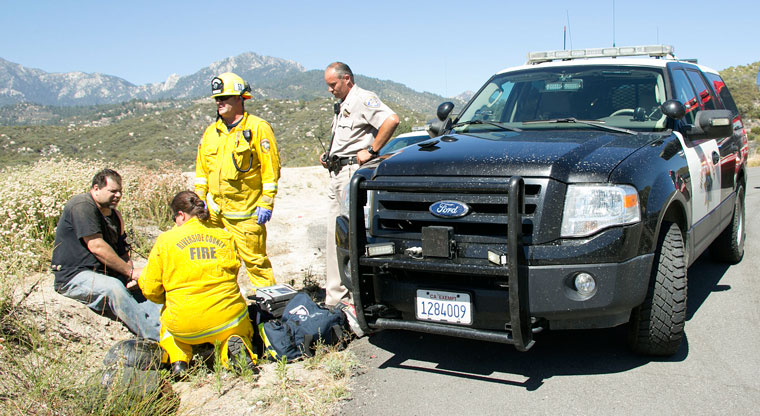 Highways 74 and 371 were the locations for multiple Hill traffic incidents over the previous week, according to California Highway Public Information Officer Darren Meyer.

In one, reported in pictures in this edition, a motorcyclist, Lawrence Galluzzo, 44, of Riverside, was traveling at an unsafe speed westbound on Highway 74 on Saturday near the intersection of 371 when a CHP officer attempted to stop him. After a high-speed pursuit ended in Galluzzo crashing, he was arrested and cited for felony evading of arrest and driving without a license. Since Galluzzo was injured and transported to a hospital, he was not incarcerated at the time of the incident. Meyer said a criminal complaint against Galluzzo would be filed by the county district attorney. Galluzzo also had no insurance, according to Meyer.

Another incident occurred in the same general area. At 2 p.m. Wednesday, July 22, there was a collision of three vehicles in the intersection of 74 and 371: a 2002 black Ford Ranger truck driven by Kevin Benson, 39, of Oceanside, a tan 1984 Dodge van driven by Frank Pislaan, 62, of Anza and a white Ford C-Max driven by William Smith, 79, of Anza. The preliminary CHP report noted one minor injury, but did not identify the injured. Also, no fault was assigned at the time of the report.

Also on Highway 371 at 12:05 p.m. Friday, a two-car collision occurred when a gray 2006 Mitsubishi Lancer driven by Aaron Franck, 20, of Anza, rear-ended a blue 2011 Hyundai Sonata driven by Astiven Gorgis, 31, of El Cajon. There were no injuries reported as a result of the collision.