With little discussion, the board approved both a policy to establish several reserve funds and how those monies may be used, and a policy governing fixed assets.

The reserve-fund policy establishes six categories of reserves and sets target allocations for each category. How soon each target is achieved will depend upon the district’s net income over the coming years. Fiscal years 2012-13 and 2013-14 both ended with negative — albeit about $20,000 each year — net incomes. The past year, 2014-15, has an estimated positive outcome of nearly $245,000, although the audit has not been completed.

The new policy allows for both restricted and non-restricted reserves. The former limits the use of those funds to the stated purpose of the reserve and these monies will be separated from the general district accounts. To use restricted funds, the board must affirm their approval. Non-restricted funds have none of these controls.

The six reserve funds are: working capital, emergency, capital improvement and replacement, vehicle and equipment replacement, vacation/sick/annual leave liability and other post-employment benefits. Each reserve fund will support both the water and sewer programs. The accompanying table shows the target levels for each reserve and whether it is a restricted fund.

The working capital fund level of about $750,000 is estimated to be about two months of normal expenditures, according to General Manager Tom Lynch’s recommendation to the board.

The total projected reserve funding goal is $5 million. At the end of fiscal year 2014-15, IWD had about $3 million in cash generally available for district use, although a portion was restricted.

“Contributions to the various reserve funds will be determined at budget time,” said Director Warren Monroe.

The fixed-asset policy will oversee the acquisition and accountability of any tangible or intangible asset whose cost is greater than $5,000 and life expectancy more than one year.

Assets whose costs are less than $5,000 will be included in the annual expenditures and not capitalized, according to Chief Financial Officer Hosny Shouman.

The policy also specifies a physical inventory at least every five years and that depreciation of the asset will begin after one month.

Lynch also announced that the U.S. Department of Agriculture’s Rural Utilities Service has granted IWD $215,000 to rehabilitate its horizontal wells and five vertical wells. The grant is for all the costs of the work and does not require IWD to match any portion of the costs.

“Funding from this grant will be utilized to rehabilitate well numbers 5, 8, 11, 16 and 27, and additional horizontal wells,” Lynch wrote in his memorandum to the board. “These wells require extensive improvements, including pumps, motors, pipe, casings and electrical components.”

Also, IWD received the first reimbursement of its costs ($275,600) for the recycled water project. This money reimburses IWD for expenses it has incurred preparing various studies, which were necessary for the funding request submission, according to Lynch. He plans to request bids within the next month.

The water program had a net income of nearly $30,000 in August with the help of $115,000 in water revenue, nearly $9,000 more than estimated. The majority of the additional revenue has come from commercial customers, Shouman said.

In the first two months of fiscal 2015-16, water revenue has totaled nearly $230,000, or about 24 percent of the estimated full-year’s collections.

IWD remains on the verge of going to a Stage 3 water emergency, Lynch told the board. While the summer rains have been a welcome occurrence, only the level of the Foster Lake wells has prevented IWD from declaring Stage 3. Rehabilitating the horizontal wells earlier this year has benefited these wells, he added.

In August, the level of the Foster Lake wells remained 43 feet below the surface, which was no change from July, but was a 3-foot improvement compared to August 2014 and still 20 feet below the 2013 level. The Rockdale well also had no change this month, but IWD’s other wells incurred lowered levels, particularly the downtown wells, which Lynch said were being pumped more frequently recently. 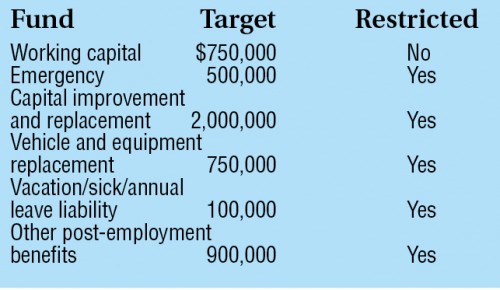