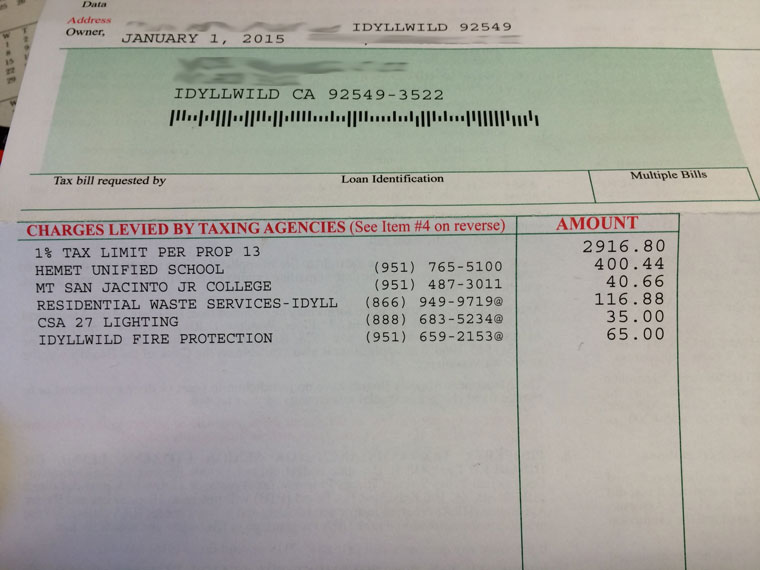 But in the recently mailed bills, that line item is missing, replaced with one that reads “CSA 27 lighting.” CSA 27 is in Cherry Valley. The effect of the mistake, of which county officials were unaware until contacted by the Town Crier and several residents, is that tax revenues could have been directed to the wrong CSA and not used to fund CSA 36 street lights and recreation, since that is what the tax bill directed.

Just before deadline on Tuesday morning, Oct. 13, John Christiansen, Riverside County assistant tax collector called to say that his office had been made aware of the mistake and would reissue new tax bills as soon as possible. “We’ll have the auditor send out an explanatory letter and our office will be reprinting corrected tax bills to send out,” said Christiansen.

On the office of Auditor/Controller’s Fixed Charge Benefit Assessment Directory, CSA 27 (Cherry Valley), district 681729 is listed just above CSA 36, (Idyllwild), district 681739. When made aware of the mistake, Leni Zarate, vice president and director of special district financing said, “On a preliminary basis, this looks like a printing error at the tax collector’s office.” Zarate’s office administers the allocation of tax dollars to special districts in the county. “We’re working on it,” said Zarate on Friday, Oct. 9. “Remedies could include issuing new tax bills with the correction or payment extensions, but that is not certain yet.”

Opal Hellwig, Riverside County Third District Supervisor Chuck Washington’s legislative assistant concurred with Zarate, although like Zarate she had only been recently made aware of the apparent mistake. “Preliminary research shows a printing and typo error from the tax collector office,” said Hellwig. “The records match with the auditor controller and the amount is the same, $35.”

First payment of property tax bills is currently due on or before Dec. 10, 2015.

In the last edition we reported that Riverside County Regional Parks and Open Space, manager of Idyllwild’s Town Hall Recreation Program, failed to deliver supplies in a timely manner for the first youth soccer game of the season. That raised questions among Town Hall recreation participants about how CSA tax dollars that fund the recreation program are being used.

There are no longer CSA 36 local advisory committee monthly public meetings at which reports were issued that detailed amounts in the recreation and street lighting fund and how those dollars were being spent.

The omission of a line item to fund recreation on the latest tax bills once again focuses attention on these questions.

Just before deadline, Verne Lauritzen, chief of staff for Third District Supervisor Chuck Washington, called to discuss how communication could be improved between Town Hall recreation users and county management. Lauritzen said the supervisor’s office will take a look at reconstituting a CSA 36 Advisory Board, perhaps with quarterly meetings to start, so that residents of the district could receive reports and raise questions about the recreation and streetlight fund, and receive and give input on how their tax dollars are being used.