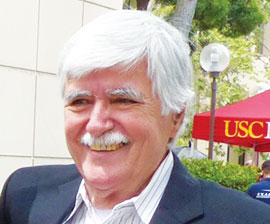 Ted Cummings passed away from a short battle with pneumonia in his home Thursday, Oct. 22, 2015, in Idyllwild at the age of 78. He is survived by his wife Joyce, daughter Kim (David) Friedricks, and grandchildren Natalie and Jimmy; son Scott (Dinora) Cummings, and two grandchildren Franchesca and Theodore; and son Ward Cummings.

Ted was born Aug. 21, 1937, in Kansas City, Missouri. His strong commitment to service led Ted to join the Navy without ever having seen an ocean. After serving four years, Ted attended the University of Kansas.

In 1960, Ted married Joyce, a year after saving her from both a blizzard and a boating mishap. After moving to California, Ted began his career as an aerospace engineer. Over a long and storied career, Ted would contribute to big name projects such as “The Man on the Moon Mission” and Reagan’s Star Wars.

Although Ted’s career was extremely successful, his number-one priority was always his wife, family and friends. His children and grandchildren often referred to him as Dr. Doolittle because of his love and caring of all living things.

Ted was a man of many interests. In particular, he loved bonsai cultivation, woodworking and community involvement. This dedication to his community was a persistent and important part of his life.

You are invited to join Ted’s wife, Joyce, and their family at Buckhorn Camp, Highway 243, at 1 p.m. Saturday, Nov. 14, for a celebration of Ted’s life. In lieu of flowers, please send donations to the Idyllwild Fire Protection District, P.O. Box 656, Idyllwild, CA 92549.