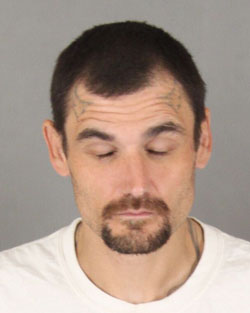 The first was a Marsden/Sanchez hearing in which Ellis, who was represented by a deputy public defender, asserted that he had been denied his right to effective counsel. Dugan denied that motion and ordered the transcript of that hearing sealed.

The case was then called for a sentencing hearing, and Ellis requested immediate sentencing, waiving arraignment for pronouncement of judgment.

Under statutes providing for sentence enhancement due to prior felony convictions, Dugan found that Ellis had two or more convictions that qualified as a strike.

On count 1, which she deemed to be Ellis’ principal count (possession of ammunition by one prohibited from owning or possessing a firearm), she denied probation and imposed a term of two years, eight months in state prison.

On count 3 (mail theft), count 6 (resisting or obstructing arrest) and count 7 (hit and run, property damage), Ellis was sentenced to 180 days in county jail, sentence to run concurrently with the state prison sentence on count 1.

Ellis, who has been in custody, was given 81 days of credit for time served. He was further ordered to pay statutory restitutions and assessment fees totaling $920, $300 of which is suspended unless his future parole is revoked. He was also ordered to pay victim restitution in an amount to be determined by the Probation Department.

Counts 2, 4 and 5 were dismissed in the interests of justice, and Ellis remained remanded to the custody of the Riverside County Sheriff.