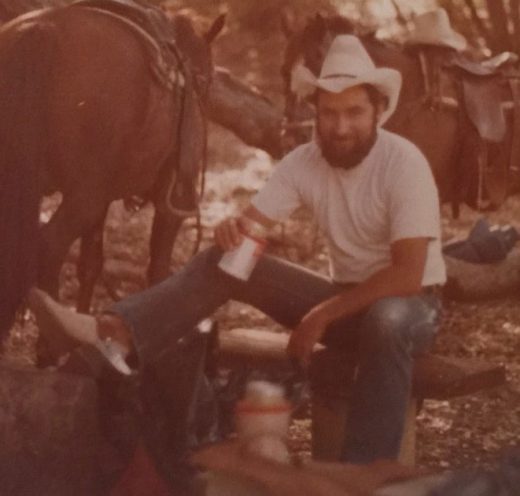 Terry Smith, resident of Idyllwild and Mountain Center from 1978 to 1987, has left the planet.

Terry was the son of “Windy” Bill and Mozelle Smith (both passed on) of Trail’s End and Huntington Beach, Terry’s old stompin’ ground.

Raised in a younger Orange County, Terry grew up ditching school to care for his plethora of pets (dogs, rabbits, homing pigeons, etc.) and to surf, something he pursued from Mexico to Barbados, island-hopping his way home on a mail boat and surviving on sea urchin eggs.

Escaping city life where he had worked in the production finish trade earning notoriety as “King of the Base” during Orange County’s building boom, and before that in the oil fields of Central California, Terry followed suit, exchanging surfboards for boots and spurs.

His daily commute to working in Hemet afforded him frequent patronage of Taylor’s in Mountain Center where he was to take a liking to their short-order cook and part-time bartender, Candy Hawkins, and determined to win her affections. A year later, his bride, escorted by long-time family friend and Hill fixture Tom Parr, married him in the back of a hay wagon at a wing ding of a wedding, complete with pit barbecue and barn dance to the music of Gas, Food & Lodging. The celebration took place at Ribbonwood Ranch in Garner Valley and was attended by family, friends and unknowns from Idyllwild, Mountain Center, Anza and afar.

Terry and Candy made their home in one of Walt and Sharon Schmidt’s cabins behind the post office in Mountain Center and, together with Candy’s two young children, Donny and Kerry, became a family.

A year come and gone, Terry’s family grew with the birth of a daughter, Naomi,  so they loaded up the truck and moved to Idy — wild that is — where Terry apprenticed with Carl Zoretich, played softball, chopped and sold wood, and made new friends, including another little one he called Jeffrey. 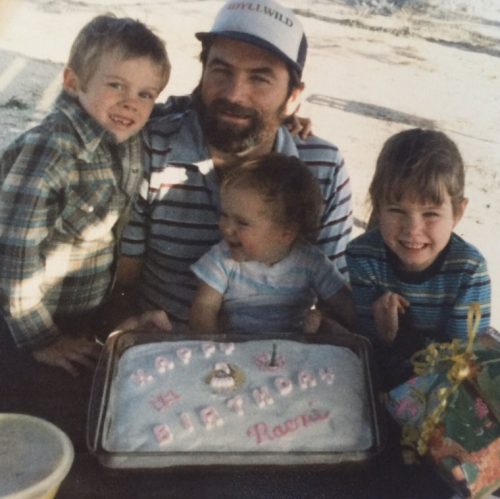 In 1986, Terry moved with his budding family to Palm Desert where, for the next 30 years, he carved out his own construction business, building everything from remodels to high-end custom homes in prestigious country clubs.

Terry was blessed to spend his last days sharing precious time with his children Don and Katie Hawkins, Kerry Granger, Jake Bell, Naomi Mozelle, Jeffrey and Peaches Smith, and his grandchildren Brandon and Vanessa “Gracie” Granger. A particularly joyous piece was getting to hold and bless his newest grandchild, 3-month-old Luc Wesley Smith, who will carry on his surname.

Terry is survived, as well, by his wife of 23 years, Candace Smith; his brother Tom Smith; his sister Renee Smith; his niece Tori Small-Woodford; and relatives and friends too numerous to mention. Terry loved his family and friends and will be greatly missed by them, so many, who loved him for the witty and warmhearted part of us that he is. Your love and friendship toward Terry throughout his life was much appreciated by him and his family.

His peaceful transition took place on the auspicious occasion of the full-moon summer solstice. A private family gathering will honor his wishes with a surfer’s memorial off the coast of Huntington Beach. Anyone wishing to read more and/or contribute in memorializing this dear friend may do so at https://www.gofundme.com/terry-smith.

CLOSED TO THE PUBLIC

The Town Crier’s office is closed to the public until further notice. We will continue to publish the weekly newspaper in print and online as well as our upcoming Explore Idyllwild Directory and Map.