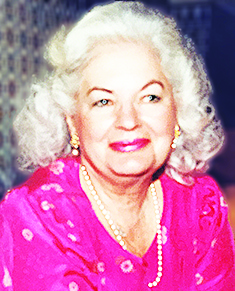 She was born in Charlie, Texas, on May 25, 1924, to James Roy and Ola Vae Curington, and she was always known in the community as “Leean.”

She was a member of the Daughters of the American Revolution and Soroptimist International. Before moving to Idyllwild, she had raised her children in the San Fernando Valley in Southern California and worked in land and real estate development, developing Lake Shastina in Northern California. During her 30 years of residence in Idyllwild, she was an avid entrepreneur, owning Bellows Antiques, Cats Meow and O’Sullivans’ Restaurant. Her passions included painting, genealogy and world travel.

She was preceded in death by her parents, husband Leland Swanson and brother Leroy Curington. She is survived by three daughters, Phyllis Curington Brown of Idyllwild, Robbin Decker of Palm Desert and Heather Bowman of Lehi, Utah; and by stepdaughter Pam Sanchez of Hemet. She is also survived by sister Jenna Griffith of Burkburnett, Texas, and brother Lloyd Curington of Austin, Texas; by grandchildren Terry Ragsdale, Jason Bowman, Brandon Bowman, Jenny Kirchner and Danielle Decker; and by six great-grandchildren.

The family celebrated Leean’s life during her final day. No other services are scheduled at this time. If you wish to donate to a memorial fund, please give to the Charlie Cemetery Foundation, c/o Linda Bevering, North Bevering Drive, Charlie, Texas 76305.