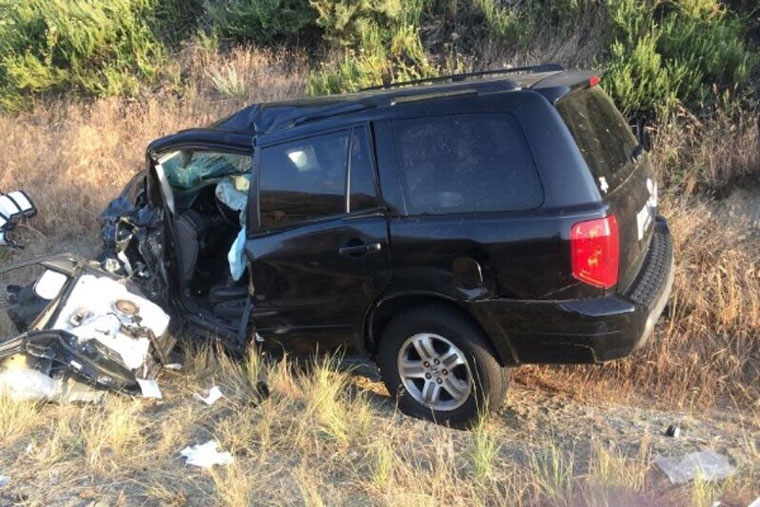 Monday evening, May 8, a fatal accident occurred in Valle Vista. The story was in the Town Crier’s May 11 edition.

While driving from work, an Idyllwild resident, Craig Wills, 62, the California Highway Patrol identified him as Phillip, was hit by a Toyota Tundra. Wills saw the Toyota’s erratic movements, tried to avoid it and had to brace for the head-on collision.

The driver of the Toyota veered into Wills lane, after swerving between lanes. According to the CHP press release, “The man driving the truck was not wearing his seatbelt and was ejected. He sustained fatal injuries and was pronounced deceased at the scene.”

Wills was injured and had to spend several days in the hospital. He is home now, with fractured vertebrae, said his wife, Kelly. Eventually, he will return to work at the Riverside County Coroner’s office. At home he has to wear a back brace and use a walker in the house.

But the commute will be much more difficult because as shown in the accompanying photo, his 14-year-old Honda was totaled. The couple’s second vehicle is a 27-year-old truck.

Kelly’s mother, Debra Gooch, is trying to raise funds to help the couple replace the truck. The Go Fund site, https://www.gofundme.com/wills-family-needs-help, has a photo of Wills’ Honda at the accident site.

“Kelly and Craig depended their vehicle to get him back and forth to work. Their only other vehicle is a 27 year-old truck. I am hoping to raise enough money for them to buy a dependable vehicle and help with money while Craig is home recovering,” Gooch wrote in her story seeking help. “It will help a very special family get back on their feet.”

Through Sunday, helpful and sympathetic friends have contributed about $2,000 toward Gooch’s goal of $12,000.

In a grateful response to the help, Craig said in an email, “This is a miracle from God and we are overwhelmed by all the prayers, love, and support that we have received.”