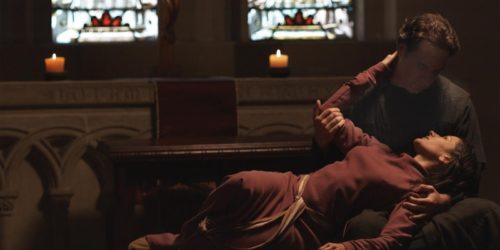 Next weekend, Idyllwild will host its first French Film Festival. Seven French short films will be shown at the Idyllwild Library Saturday, Oct. 21.

The festival begins Friday night at Middle Ridge Winery Tasting Gallery, when “Heloise” will be shown. While this is an English-language film, the subject is French romance.

The idea for the festival originated with Debra Varnado Tobias, a “newbie to producing this type of event.” She is a member of Idyllwild’s French Fun Book Club. It is helping her French language skills on the way to fluency.

While studying and searching the Internet, she visited the French Embassy in New York website. There she discovered “The Best of French Short Films.” The Cultural Services program in the embassy offers a selection of short films from the most recent International Short Film Festival, Clermont-Ferrand. The films are shared with noncommercial theaters.

The Clermont-Ferrand Festival is an illustrious French event. Tobias said, “For several decades, the festival has had the bragging rights for being the biggest short-film festival — and the second-largest film festival — in France after Cannes when it comes to audience and professional attendance.”

Next, Tobias contacted Shannon Ng, the Idyllwild Library librarian, to see if the library could serve as a theater and the French Embassy to arrange for a selection of films. Late this summer, she achieved both and next week the town can share in her accomplishment.

(See a list of the films to be shown below.)

But Tobias was not complacent after arranging for a French Film Festival in the San Jacinto Mountains. She then contacted Gayla Kraetsch Hartsough. If she cooperated, Tobias would have a bigger attraction for the film fest.

Hartsough is the film writer and producer of the film “Heloise,” which is about the historic relationship of two 12th century French lovers, Heloise and Abelard. It is a love affair, which turns sad, between a philosopher and theologian, and his student Heloise.

“It ends with profound consequences for both and raises a host of social, philosophical and theological questions,” Tobias wrote.

This addition to the festival was pure “serendipity,” according to Tobias. She was interested in another Hartsough film, but learned of “Heloise” and its French basis.

In response to an invitation, Hartsough wrote, “Sounds fabulous, I’m in.” Her films have been shown at more than 50 festivals, including Palm Springs, Denver Starz, Houston, LA Shorts International, New Orleans and Cannes Short Film Corner, she wrote.

“Heloise” is in English and will be shown about 8 p.m. Friday, Oct. 20, at Middle Ridge Winery Tasting Gallery. Hartsough will be at Middle Ridge Friday to discuss the film before it is shown and answer questions after it is screened. There is no charge for the “Heloise” showing. The festival event will start about 6 p.m. in the upper level of the gallery.

In preparation for “Heloise,” Tobias said, “French Fun’s Book Club is sponsoring a group reading of the letters of Heloise and Abelard, 3 p.m. Thursday, Oct. 19 at the Idyllwild Library.  The reading will be in English and is open to the public.”

Again, Tobias wanted to attract more potential French linguists. She has invited Sandrine Cassidy, director of Festivals and Distribution at the University of Southern California’s School of Cinematic Arts, to talk at about 7 p.m. Friday at Middle Ridge. Cassidy is knowledgeable and experienced with film festivals, including the Clermont-Ferrand, Tobias said.

Saturday, at 9:30 a.m., the library’s doors will open for the first screening of the seven films. Later that day, about noon and 2:30 p.m., will be additional screenings. Tobias recommended, “Guests should reserve their seats by Oct. 16 at http://idyllwildlibrary.eventbrite.com.”

And she emphasized that the seven French films all have English subtitles.

From the 2016 Festival All with English subtitles.

Synopsis: Youri is 20 years old and he has always lived with his mother in a housing development near Paris. Now his building is about to be demolished because of an urban renovation project. But how can you take flight when your spaceship has been grounded?

Synopsis: Both a scientific and dreamlike documentary, “Ghost Cell” is a stereoscopic plunge into the guts of an organic Paris seen as a cell through a virtual microscope.

Synopsis: Guy Moquet (or Guimo, or Guim’s) promised Ticky to kiss her at dusk in front of everybody, right in the middle of the neighborhood. Maybe not that crazy, but surely not that simple.

Synopsis: A journey into the heart of a great, abandoned council estate. “Peripheria” depicts an urban environment turning wild: a modern Pompeii where the wind blows and dogs roam through the vestiges of human life.

Synopsis: Fabio and Dimitri head to the Chicha so that Dimitri can finally perhaps talk to Linda. On the way, they cross a duck with its ducklings.

Synopsis: We are bombarded by the intensity of a battle between desperate soldiers during the First World War. Each frame of this animated live-action film reveals its own painful yet detailed history. The numbing futility of war, the agony of conflict and survival, the discovery of brotherhood.