About 5:35 p.m. Saturday afternoon, Oct. 14, a white Chrysler 300 was traveling northbound on Highway 243 near Marian View Drive. It speed was approximately 45 miles per hour.

As the driver started to enter the turn near Marian View Dr., he didn’t complete the turn causing him to continue straight ahead, then sideswiping a black Lincoln, which was traveling southbound. Then next striking a white Dodge Ram truck head-on that was also traveling southbound, according to California Highway Patrol Officer Graham Aanestad.

Three occupants from the cars involved in the incident sustained minor injuries and were transported to local hospitals. One ambulance went to Eisenhower Medical Center and one to Riverside County Regional Medical Center.

Neither drugs nor alcohol were not suspected as being the cause of the incident. 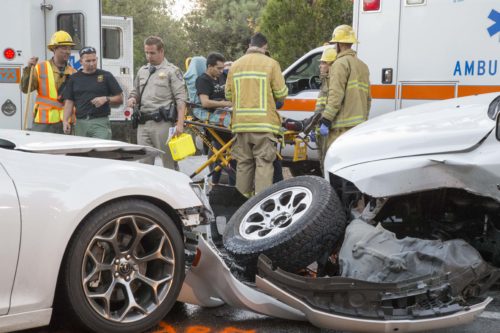