Guitar builder, player, artist and teacher Dave Pelham has for many years gone to Paracho, Michoacán, Mexico for the art and artistry of the classical guitar for which this small city is world renowned.

More than 200 guitar builders are within the 2 square miles of this city of 37,000. Many have studied the master guitar builders of Spain with the result that Paracho guitars have achieved international recognition for their quality and sound.

In recognition of the astonishing skills of young Paracho guitarists, Pelham will bring to Idyllwild the winner of the annual Paracho guitar competition and festival, Feria de La Guitarra, 18-year-old Juan Pablo Sixtos, for a free concert at Lowman Concert Hall on the Idyllwild Arts campus.

Sixtos is a native of Paracho and is currently studying music at the Conservatorio de las Rosas in Morelia, Michoacán. For the youth of Paracho, learning to play guitar is a second religion. Many begin as young as 3 and become accomplished players in their teens.

Also featured in the Idyllwild concert is Mariana Gomez, Paracho native and now a master guitarist who has performed internationally and is the current artistic director of the Paracho Guitar Festival.

Mariana began her musical studies at age 7 at the Center for Research and Development of Guitar in Paracho under the tutelage
of her father, Jaime Gomez, who was then studying with guitar masters Sergio Damian Wilson and Manuel Espinas. She has performed professionally in Mexico, the U.S., Brazil, Czech Republic and Peru.

As a child, her first-place awards in numerous competitions including in Paracho and Guadalajara, along with invitations to 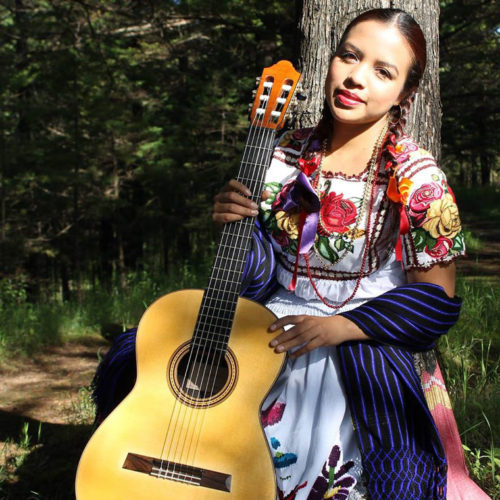 play at important festivals including the Latin-American Guitar Festival in Chicago and the Santa Catarina Music Festival in Brazil, are testaments to her extraordinary skills at a young age.

In 2011, the mayor of Paracho awarded her the distinction of “Woman with an Outstanding Career as a Promoter of the Guitar Culture in Mexico.”

She is a member of the Paracho Anapu Guitar Quartet composed of her two brothers and father, and is featured on the CD “Raza de Bronce,” showcasing native music of P’urhepecha arranged for four guitars.

Pelham hopes the concert will be well-attended and successful, and that this celebration of the classical guitar music of Paracho can become an annual event in Idyllwild’s arts calendar.

“The Art of the Guitar in Mexico,” classical guitar concert, takes place at 2 p.m. Sunday, Nov. 12, in the Lowman Concert Hall on the Idyllwild Arts campus. Lowman Hall is known for its exceptional acoustical properties, especially for unamplified instruments, and will be a perfect venue for classical guitar. The concert is free to the public and all are encouraged to attend.